Shelling of bus by Syrian regime kills 10 in Aleppo 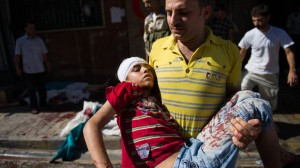 At least 10 people, including two children, were killed in Syria’s northern city of Aleppo after a regime tank shell smashed into a bus, an NGO said on Tuesday.

The Syrian Observatory for Human Rights said the shell hit a bus in the Tariq al-Bab neighborhood, adding that the toll could rise because a number of people had been seriously wounded.

The Britain-based group said a woman was also among those killed in the blast.

A video filmed by activists and uploaded by the Observatory on the sharing website YouTube shows chaotic scenes, with the back of a red public bus ablaze and spewing thick plumes of black smoke.

Round loaves of bread apparently sent flying from a street stall litter the ground along with rubble from a nearby building and glass from the windows of the bus and a minivan partially destroyed in the blast.

Groups of men carry injured passengers away, some trailing blood on the ground as they are moved.

Others lift a body that appeared to be partly burnt in the blast, missing its legs.

More than 126,000 people have been killed in Syria since the beginning of the conflict in the country in March 2011.