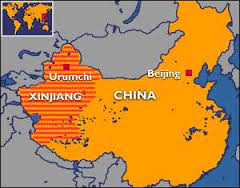 Xinjiang is home to a Turkish-speaking, Muslim people known as Uighurs, some of whom resent what they see as oppressive treatment by the government.

The Xinjiang government said police shot dead eight people on Monday during the attack in Yarkand county close to the old Silk Road city of Kashgar in Xinjiang’s south. The violence raised the death toll from clashes there to at least 35 since November.

They had also raised funds, made and tested explosives for planned terrorist attacks, Xinhua cited Xinjiang police as saying.

Judging from their names, the suspects appear to be Uighur.

Many Uighurs chafe at restrictions on their culture, language and religion, though the government insists it grants them broad freedoms.

Rights groups and exiles say police often use often heavy-handed tactics against the Uighur community. Violence has broken out previously when groups of Uighurs protest at police stations, they say.

At least 91 people, including several police, have been killed in violence in Xinjiang since April, according to state media reports.

This month, police shot dead 14 people during a riot near Kashgar in which two policemen were also killed.

China has previously blamed some of the violence in Xinjiang on Islamist militants plotting holy war.