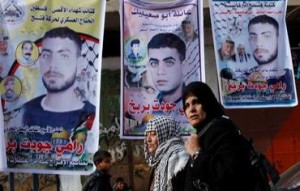 Israel released 26 Palestinian prisoners early Tuesday, the third of four groups it promised to free as part of peace talks restarted during the summer.

Most of the prisoners were from Palestinian Authority President Mahmoud Abbas’ ruling Fatah faction and were serving long sentences for killing Israelis.

Israel released the five Jerusalem prisoners at a checkpoint on the Mount of Olives where they were awaited by hundreds of family members, friends and officials carrying Palestinian flags and posters of the prisoners.

Right-wing Israelis who consider the prisoners terrorists staged a sit-in outside the Old City residence of one of the Jerusalem prisoners and attempted to break into the house, causing clashes with Palestinians. Police separated the two groups.

The three prisoners from Gaza were sent to the Erez crossing into the coastal strip, where hundreds of their relatives and friends waited for them.

The 18 prisoners from the West Bank included a seriously ill resident of the Hebron area who was not on the original list of 104 prisoners to be freed. Israel decided to release him because of his condition.

The West Bank prisoners were driven on buses out of the Ofer military camp and greeted by cheering family members and friends who waited in cold, damp weather. Dozens of cars followed the buses through Ramallah to the presidential headquarters, where Abbas and other officials greeted the prisoners, shaking hands with each and kissing them on the cheek.

Abbas described the event as “a happy day for all of us and for our heroic prisoners, who have come out today to freedom to live as free people, even though they were also free when in prison.”

Adnan Afandi of Bethlehem, one of the freed men, had served 21 years in prison. “I feel that we came out from the grave and into life once again,” he said.
The first group of 26 prisoners was released in mid-August, the eve of the resumption of Palestinian-Israeli negotiations after three years of stalemate. The second group of 26 was freed Oct. 30.

The final group is scheduled to be released in March.
LA Times