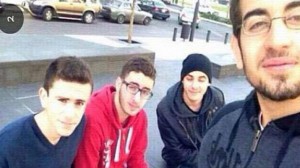 Mohammad al-Chaar, a Lebanese teenager who was seen posing for a group photo with his friends in front of a bomb-laden car moments before it exploded, died of his injuries in Beirut on Saturday.

“The number of victims from the attack rose to seven after the death of young Mohammad al-Chaar this morning, succumbing to his injuries at the American University of Beirut Medical Center,” said Lebanon’s official NNA news agency, according to Agence France-Presse.

Following Friday’s bombing in the heart of Beirut, press photographers saw the 16-year-old lying bleeding on the pavement, before he was taken to hospital with severe injuries.

Dozens of people were also wounded in the bombing, which officials said was caused by 50-60 kilograms of explosives.

The news of the teenager’s death was met with an outpouring of grief from friends and family.

The ‘selfie’ of al-Chaar was widely distributed on the internet, and the confirmation of his death sparked an outpouring of tributes on social media networks.

Chaar and his friends Omar Bikdash, Rabih Youssef and Ahmad Moghrabi, all secondary school students, were at a park nearby enjoying a sunny Friday morning at the time of the explosion.

Moghrabi, Youssef and Bikdash survived the blast while Chaar was transferred to the hospital after suffering serious head wounds.

Dozens of people were also wounded in the bombing, which officials said was caused by 50-60 kilograms of explosives.

Chatah is to be buried at the mausoleum of Hariri’s father on Sunday, which President Michel Sleiman has declared a national day of mourning.

Rafik Hariri, the former prime minister, was killed in a suicide bombing on the Beirut seafront on Feb. 14, 2005.