Chatah: death of a ‘noble figure who believed in dialogue’ 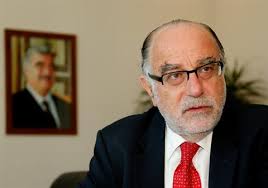 Dr. Mohamad Chatah advised two former Lebanese prime ministers, Fouad Siniora and Saad al-Hariri, and also served as finance minister. He was a government spokesman during the country’s war with Israel in 2006, and spent several years in America as Lebanon’s ambassador to the US and working for the IMF.

The 62 year-old was not a particularly controversial figure in the country and was known as a moderate.

He had no particular power base of his own, but his international experience was valued in government circles.

Chatah has been described by Lebanon’s current Prime Minister Najib Mikati as a “noble political figure who believed in dialogue, the language of reason and the right to different views”.

His work in government put him into contact with Hezbollah, though he was a vocal critic of it. A message on his Twitter account less than an hour before the blast accused the group of trying to take control of the country.

The Shi’ite movement is now suspected by some of being behind his killing, although Hezbollah parliamentarian Ali Ammar described the explosion as a crime.

“We condemn this terrorist act,” he told Hezbollah’s Al Manar television. “It is part of a terrorist wave which the region and Lebanon are witnessing.”

No one has claimed responsibility for the attack but fingers were pointed at Hezbollah and Syria because he was an outspoken critic of the Syrian regime and of Hezbollah.

Chatah’s death comes 20 days before the U.N.-backed Special Tribunal for Lebanon begins the trial of five Hezbollah suspects over the 2005 assassination of former PM Rafik Hariri. Like Chatah, Hariri was also killed in a car bombing in downtown Beirut.

Judge Saqr Saqr ordered the earlier today the erection of a tent at the site of the downtown blast in order to determine the nature of the explosives used in the attack and the size of the crater it created.

In a statement, the 15 members of the U.N. Security Council strongly condemned the attack and “reiterated their unequivocal condemnation of any attempt to destabilize Lebanon through political assassinations.”

The bombing deepened the tension in Lebanon, which is struggling to cope with the fallout from the civil war in neighboring Syria, including the influx of more than 1 million Syrians who have sought refuge from the violence in their homeland.

Lebanon also has had only a weak and ineffectual caretaker government since April, with the two main political blocs unable or unwilling to reach a compromise to form a new Cabinet.

Hezbollah’s overt role in Syria has inflamed Lebanon’s already simmering sectarian tensions. A wave of violence that has washed across the country this year has fueled predictions that Lebanon, which is still recovering from its own 15-year civil war that ended in 1990, is on the brink of slipping back into full-blown sectarian conflict.

The last major assassination in Lebanon took place Oct. 19, 2012, when a car bomb killed Lebanon’s top intelligence chief, Wissam al-Hassan. Al-Hassan, a member of Hariri’s security circle, was a powerful opponent of Syria’s influence in Lebanon and many here blamed his killing on Hezbollah and the Syrian regime.