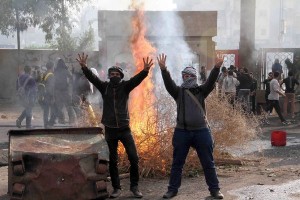 An explosive device went off Thursday outside a university campus in the Egyptian capital, injuring at least four people on a passing bus, witnesses said.

A short time later, another small blast went off in the area. Officials said the devices appeared to be homemade bombs.

The first blast, which was loud but relatively small, took place in a roadway near student dormitories at Al-Azhar University in the Nasr City district of Cairo, according to the bus driver and passersby. There was little damage other than to the bus.

There was no immediate claim of responsibility. Police quickly converged on the scene and cordoned off the area.

A total of five people were injured by the explosion, officials and state media said. A crowd gathered around the bus, some shouting slogans in favor of army chief Gen. Abdel Fattah Sisi and the military-backed government.

Two unexploded devices were found after the initial blast and defused. The second of the devices to be found made an audible bang as it was being defused, startling onlookers.]

Al-Azhar has been a venue for near-daily protests by students demanding the reinstatement of Islamist president Mohamed Morsi, deposed by a popularly supported military coup in July. Pro-Morsi demonstrations at the campus have resulted in frequent clashes between students and police.

Bombings in Cairo have so far not been a feature of the ongoing confrontation between security forces and Morsi’s supporters in the Muslim Brotherhood. The explosion came one day after Egypt’s government designated the Brotherhood a terrorist organization, and two days after a bombing at a police headquarters in northern Egypt killed at least 15 people.

A militant group mainly active in the Sinai Peninsula claimed responsibility for that attack in Mansoura, in the Nile Delta north of Cairo.

Photo: Egyptian students of al-Azhar University who support the Muslim Brotherhood raise their hands showing the four-finger sign, called Rabaa (four) in Arabic, associated with the crackdown on supporters of ousted Islamist president Mohammed Morsi, during clashes with riot police in Cairo on December 10, 2013.