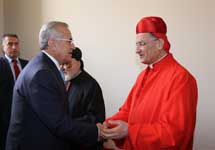 Lebanese President Michel Suleiman on Wednesday said that a new cabinet must be formed by March 25, the constitutionally mandated beginning of the presidential election period.

“It is necessary to form a government… March 25 is a red line,” he said in a press conference following his closed door meeting in Bkirki with Maronite Patriarch Bechara Boutros al-Rai.

He added that time is running out for the formation of a new government ahead of staging the presidential elections.

“I will seek Lebanon’s interest,” Suleiman said in response to a reporter on what measures he may take should the constitutional period end amid the political powers’ failure to form a new cabinet.

“We must form a new government and come up with a ministerial statement, both of which need at least a month of work,” he warned.

“There is no link between the [upcoming] Geneva II peace conference and the formation of a government in Lebanon,” Suleimann said in reference to press reports linking the resolution of the country’s political impasse to a diplomatic breakthrough on the Syrian conflict.

He also questioned the Hezbollah-led March 8 alliance’s call for a political cabinet, asking, “Are politicians the ones who bring together the nation?”

“Why is it said that a political cabinet is an inclusive one”?

He added: “What is the definition of an all-inclusive government?”

“We have a democracy and a constitution. They alone determine Lebanon’s political fate,” stressed the president.

Suleiman’s six-year tenure ends in May 2014 and he repeatedly stated that he is against the extension of his term.

Prime Minister-designate Tammam Salam is struggling to form his cabinet, months after the resignation of caretaker PM Najib Mikati. He has cited the pre-conditions imposed by the opposing March 14 and March 8 blocs as a reason behind the delays in the process.

Hezbollah and the March 8 bloc back the 9-9-6 government proposal, which calls for the March 8 and 14 alliances to receive nine ministers each, while centrists would hold six seats in the cabinet. March 14 parties have rejected the proposal.

March 8 parties, in turn, have rejected the notion of a fait accompli cabinet, which could be formed by Suleiman and Salam without the consensus of the country’s political parties.

There are growing concerns that the presidential elections will not be staged given the political powers’ failure to reach an agreement over a new government.

Earlier on Wednesday Kuwaiti Al-Rai newspaper reported that Suleiman is planning the formation of a fait accompli cabinet in coordination with Salam.

“Such a government would be legal from a constitutional standpoint, but in practice would fragment Lebanon,” they quoted Berri as saying.

“Berri believes a fait-accompli cabinet will move Lebanon to the unknown.”

Lebanon’s constitution stipulates that the country’s president can create a cabinet by issuing a decree that has the agreement of the premier designate.

“Suleiman’s green-light for a fair accompli cabinet would be a service for [Hezbollah] because it would give the party sufficient reason to say goodbye to the Taif Agreement, which was written in Saudi Arabia, and demand a new deal [reflecting] the current balance of power in Lebanon,” the sources told the daily.

Hezbollah is reportedly opposed to the 1989 Taif Agreement that brokered the end of Lebanon’s 15-year civil war.