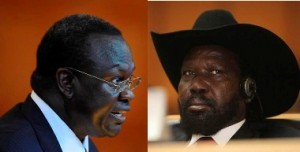 The U.S. and the United Nations are preparing to make more peacekeeping troops available for the growing conflict in South Sudan, as President Salva Kiir opened the door to talks with his deposed vice president.

UN Secretary General Ban Ki-moon asked the Security Council to add 5,500 soldiers to the peacekeeping mission of 7,000 already there. The U.S. has moved about 150 Marines to nearby Djibouti to assist with any additional evacuations in South Sudan, said Benjamin Benson, a spokesman for U.S. Africa Command, in an e-mail today.

At an emergency meeting yesterday in New York, all 15 members of the UN Security Council showed a “positive reaction” to Ban’s request for the troops, plus 423 police personnel, said Gerard Araud, French Ambassador to the UN and president of the council this month. The council may authorize the boost today, he said.

The military maneuvering underscored what Ban called the “mounting urgency” in South Sudan, where fighting that began Dec. 15 has killed at least 500 people. About 100,000 have been internally displaced and about 45,000 are seeking protection at UN camps in the country, Araud said.

U.S. envoy Donald Booth, who met yesterday with Kiir in the capital, Juba, said the president expressed a willingness to begin talks with former Vice President Riek Machar “without preconditions, as soon as his counterpart was willing.”

“The United States emphasizes the urgency of the situation and stands ready to support these efforts,” Booth told reporters on a conference call.

Fighting broke out in South Sudan when gunmen attacked the presidential palace in Juba. The violence has been largely along ethnic lines, with Machar’s Nuer group pitted against the Dinka people of Kiir.

Machar, who is being hunted by government security forces, has demanded that Kiir step down for failing to unite the nation. Kiir fired Machar and the rest of his cabinet in July. The two sides agreed to an offer by neighboring Kenya to host peace talks, Kenyan Foreign Ministry Principal Secretary Karanja Kibicho told reporters yesterday in Nairobi.

Booth said he also met with 11 members of the Sudan People’s Liberation Movement who are detained in Juba. He said they expressed a readiness “to play a constructive role in ending the crisis through peaceful political dialogue and national reconciliation.”

Fighters led by General James Kong Chol seized Bentiu, the state capital, and other parts of the northern region on Dec. 21 and have aligned themselves with Machar, Chol said in a phone interview Dec. 22. It was the second state to fall to anti-government forces afterKiir’s administration lost control of Bor, the capital of Jonglei province, to a group headed by General Peter Gatdet Yak on Dec. 18. Chol and Yak previously headed government forces in the two states.

“We’re controlling the area of Unity state,” Chol said from Bentiu. “My government planned to kill me and I have nowhere to go. I decided to join Riek Machar.”

The UN discovered a mass grave in Bentiu amid reports of at least two others in the Juba, Navi Pillay, the UN High Commissioner for Human Rights, said in an e-mailed statement today.

Pillay also expressed serious concern over reports that several hundred civilians were arrested during house-to-house searches and from various hotels in Juba. There also were reports that hundreds of members of the South Sudan National Police Service were ordered to be disarmed and arrested from police stations across Juba, according to the statement.

Kiir said yesterday he agreed to a request by the six-nation Intergovernmental Authority on Development to help mediate an end to the crisis.

“We’re ready for any dialogue, but Dr. Machar must come to the table without any preconditions,” he told lawmakers in Juba. “Through dialogue I think we can resolve this misunderstanding very quickly.”

South Sudan seceded from neighboring Sudan in July 2011 and took three-quarters of the formerly united country’s oil output. The landlocked country exports all its crude, about 220,000 barrels a day, through pipelines across Sudan. The oil provides more than 95 percent of government revenue.

South Sudan has sub-Saharan Africa’s biggest oil reserves after Nigeria and Angola, according to BP Plc (BP/) data. Its low-sulfur crude is prized by Japanese buyers as a cleaner-burning fuel for power generation. Japan will supply 10,000 bullets for UN peacekeepers in South Sudan, marking the first exemption under the Asian nation’s self-imposed curbs on arms exports, Kyodo News reported, without citing anyone.