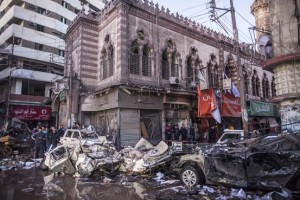 CAIRO—Egypt’s government blamed the Muslim Brotherhood for an apparent suicide bombing of a police headquarters in the Nile Delta region, calling it a terrorist attack.

The death toll from the explosion rose Tuesday to 14 from 11 a day earlier when the bomb went off in the city of Mansoura, state media reported. More than 130 people were injured.

“The initial investigations suggest a suicide bomber was in the truck filled with a huge amount of explosives that caused the blast right outside the building,” the Interior Ministry spokesman said, adding that authorities were still investigating and uncovering evidence.

The bombing will almost certainly fuel already rampant anti-Brotherhood sentiment in Egypt and bring an even harsher crackdown on the group by the military-backed government.

Since the military pushed the once-powerful Islamist group from power in a military coup in July, it has rounded up and prosecuted its top leadership and thousands of followers. Security forces have killed more than a thousand supporters in an effort to break up mass street demonstrations.

There was no immediate claim of responsibility for the attack in Mansoura, the capital of Dakhliyah province.

The Brotherhood denied involvement and strongly condemned the “cowardly bombing,” offering condolences to families of the victims. It made the statement via Twitter TWTR +7.99% using its official handle.

A spokesman for Prime Minister Hazem el-Beblawi called the Brotherhood a terrorist group, according to state-run media.

The Brotherhood fired back by calling the premier the “military junta’s puppet prime minister” and accusing him of using the attack to “exploit the blood of innocent Egyptians through inflammatory statements designed to create further violence, chaos and instability.”

The explosion sheared part of the facade off the headquarters. Televised images showed burned out shells of cars overturned on the streets next to piles of rubble from the collapsed facades of nearby buildings.

The governor of Dakhiliyah province said most of the dead and injured were security personnel, state-run television reported. The head of state security in Dakhiliyah was among the injured.

Experts on militancy in Egypt said the attack was more likely executed by militants based in the restive Sinal Peninsula who have no connection to the more moderate Brotherhood.

Sinai, where Egyptian law enforcement is weak, has seen a surge in violent attacks by Islamist militants since the authoritarian government of Hosni Mubarak fell in the 2011 popular uprising.

The scale and ferocity of the attack point to Ansar Beit al Moqadis, an al Qaeda-linked group that has claimed responsibility for some of the larger attacks over the past several months, said David Barnett, a research associate at the Washington-based Foundation for the Defense of Democracies.

Those attacks included an attempted assassination of the interior minister, who is in charge of security forces.

The attack on Monday came a day after Ansar Beit al Moqadis warned the military to withdraw from its base of operations in Sinai or face an escalation of violence.

If those militants can now reach targets in mainland Egypt, outside their stronghold in Sinai, it would indicate the group is strengthening, Mr. Barnett said.

“I think the attack points much more toward Sinai jihadists than the Brotherhood. But the easy out is for the authorities to point toward the Brotherhood,” he said. “It supports the theory that Ansar Beit al Moqadis is moving toward bigger and bolder, rather than attacks of convenience.”

Even as attacks continue, the military has boasted about successful operations against jihadists, who were outraged by the military’s forcible ouster of Mr. Morsi from power.

In a news conference on Monday, Colonel Ahmed Ali, the military spokesman, said security forces had killed 184 “terrorists” in Sinai and arrested 843 since June 30. The figures could not be confirmed independently.

Separately, however, Egyptian intelligence chiefs have acknowledged that jihadist groups have widened their base of operations over the past few months to include targets in densely populated Nile River valley, north of the capital Cairo.

Authorities in Egypt have expressed concern about a rise in terrorist attacks as the transitional government moves toward adopting a constitution and elections next year.
WSJ