Crowds Gather in Bethlehem for Christmas 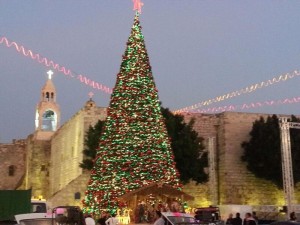 Thousands of Christian pilgrims from around the world packed the West Bank town of Bethlehem for Christmas Eve celebrations on Tuesday, bringing warm holiday cheer to the biblical birthplace of Jesus on a cool, clear night.

The heavy turnout, its highest in years, helped lift spirits in Bethlehem as leaders expressed hope that the coming year would finally bring the Palestinians an independent state of their own.

“The message of Christmas is a message of peace, love and brotherhood. We have to be brothers with each other,” said Latin Patriarch Fouad Twal, the top Roman Catholic cleric in the Holy Land, as he arrived in town.

Excited tourists milled about the town’s Manger Square, stopping in restaurants and souvenir shops and admiring a large, illuminated Christmas Tree. Marching bands and scout troops performed for the visitors in the streets, and on a stage next to the tree.

Will Green of New York City, along with his wife, Debbie, and their 2-year-old daughter Daphne were among the crowds of people who greeted Twal’s motorcade as he entered town from nearby Jerusalem.

Green said that being in Bethlehem for Christmas was a dream come true. “All the stories that we grew up with. It’s here. It’s part of our life. We heard them in the family, school and church. This is the birthplace,” he said.

Green slowly pushed a stroller and his wife held their daughter as they followed a crowd toward the Church of the Nativity, built on the site where Christians believe Jesus was born.

Palestinian dignitaries greeted Twal at the entrance of Bethlehem. His motorcade crawled through the town’s narrow streets as he stopped to shake hands and greet the throngs of visitors. It took him nearly 90 minutes to make the short trip to the Church of the Nativity, where thousands of people were gathered ahead of Midnight Mass.

Palestinian President Mahmoud Abbas and the European Union’s foreign policy chief, Catherine Ashton, were among the dignitaries expected to attend the service.

The number of visitors remained below the record levels of the late 1990s, when Israeli-Palestinian peace efforts were at their height.

Following a Palestinian uprising that began in 2000, the numbers plunged. But thanks to a period of relative calm, they have been steadily climbing in recent years — and are expected to get an extra push this year thanks to the resumption of peace talks.

“Our message is a message of justice and peace,” said Palestinian Tourism Minister Rula Maayah. “We Palestinians are seeking peace and we deserve to have peace and our children deserve to live in peace.”

Maayah said the number of visitors to Bethlehem was expected to jump by about 14 percent from last year.

A spokesman said 10,000 foreign visitors had entered town by the early evening, slightly higher than last year. Israel’s Tourism Ministry, which coordinates the visits with the Palestinians, said the number could reach 25,000 during the holiday season.

Despite the Christmas cheer, Mideast politics loomed in the background. In order to enter Bethlehem, Twal’s motorcade had to cross through the hulking concrete separation barrier that Israel built during the uprising. Israel says the barrier is needed to keep attackers from entering nearby Jerusalem, but Palestinians say the structure has stifled the town and stolen their land.

Maayah said that the barrier, along with nearby Israeli settlements and Israeli control of archaeological sites in the West Bank, has made it difficult to develop the tourism sector.

In addition, few Palestinians seem to think that the current round of peace talks will bear fruit. U.S. Secretary of State John Kerry relaunched the talks last summer, but there have been no signs of progress.

Israel carried out a series of airstrikes and other attacks Tuesday in the Gaza Strip in retaliation for the deadly shooting of an Israeli civilian who had been working along the border. The fighting, which left a 3-year-old Palestinian girl dead, was the heaviest in more than a year.

Christmas also serves as a reminder of the dwindling numbers of Christians who live in the Holy Land. Over the decades, tens of thousands of Christians have left, fleeing violence or in search of better opportunities overseas. Christians now make up a tiny percentage of the population.

Bethlehem is now only one-third Christian, with most residents Muslim. In an annual gesture, Israel permitted some 500 members of Gaza’s small Christian community to leave the Hamas-ruled territory and cross through Israel to attend the celebrations in Bethlehem.

But for one night at least, residents and visitors brushed aside their troubles to celebrate the holiday.

Nick Parker, a student from Georgia Tech University, said he was enjoying the food and making friends with local residents and fellow travelers.

“It’s special to be here where Jesus was born,” he said. “It’s a special opportunity, once in a lifetime.”