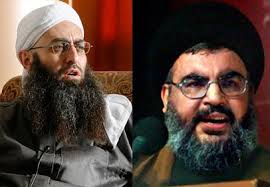 The Future Movement parliamentary bloc on Tuesday launched another verbal attack on Hezbollah’s “militia,” stating that the party and extremist groups are “two sides of the same coin.”
“The weapons of the resistance were formerly aimed at Israel but have now become positioned and used inside the country,” the MPs said in a released statement after their weekly meeting at the Center House.

Hezbollah’s arms have thus become those of a militia, they added.

The Future Movement bloc elaborated: “Hezbollah’s arms aim at changing the political system in Lebanon but they no longer enjoy Lebanese consensus. The party’s call for agreeing on a new political formula in the country is no longer viable after it took the unilateral decision to launch a war against the Syrian people in 2012.”

“By taking this decision, Hezbollah has abandoned all national pacts and accords, including the Baabda Declaration.”

Again, Future Movement MPs called on Hezbollah to withdraw its forces from the neighboring country.

“The life in Lebanon will not go back to normal unless Hezbollah goes back to playing its national role only,” they said.

“Hezbollah’s fighting in Syria, which was a regional decision, has dragged the Lebanese into a confrontation with Syrians,” they added.

“The party is trying to give the international community the impression that it is fighting terrorism but this attempt has been exposed. Hezbollah and extremist groups are two sides of the same coin.”

Sunni extremist groups emerged in Lebanon to confront Hezbollah within Lebanon, following the party’s decision last May to join the forces loyal to president Bashar al Assad in their fight against the mostly Sunni rebels. The Sunni extremist reportedly view Hezbollah as a model they want to imitate.

Hezbollah is reportedly bleeding in Syria more than anytime since its establishment three decades ago and it’s losing more than it lost during its previous confrontations with Israel, according to reports.
AFP/ Agencies