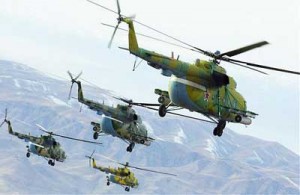 A nine-day intensive “barrel bomb” bombardment of Aleppo and other northern towns by the Syrian regime of President Bashar al-Assad has killed hundreds of civilians and cast renewed doubt over next month’s peace talks.

Reports by several counts all put the death toll inflicted by shelling and the home-made “barrel bombs” dropped from helicopters at more than 300 civilians. An activist on the ground last night told The Daily Telegraph that 480 were dead.

He and the London-based Syrian Network for Human Rights both counted 86 children among the victims. Distressing photographs of the bloodied corpses of infants have begun circulating the internet, some posted by Aleppo doctors. Many are too gruesome to be published.

In other pictures, children are seen queuing for treatment at the city’s makeshift clinics, caked in blood and dust. In yet another video, said to have been taken of a school in the town of Marea north of Aleppo hit by a bomb, children are seen being pulled from the rubble.

After months in which the fighting on the ground has taken second place in international analysis to fears of the rise of al-Qaeda in the rebel ranks and the chances of reaching some sort of political compromise at the “Geneva 2” peace talks, the scale of the suffering has forced the tactics of Mr Assad’s army back to centre stage.

“I am deeply concerned at the escalating level of violence in Syria,” the Foreign Secretary, William Hague, said. “I condemn the use of brutal and indiscriminate weapons in densely-populated civilian areas, such as we have seen in Aleppo in recent days.”

Last night the opposition Syrian National Coalition said unless the bombing of Aleppo ceased then they would not attend those planned peace talks in Geneva.

Despite repeated talk of Mr Assad having turned the tide of the war with the support of Iran and reinforcements from Hizbollah and Iraqi Shia militias, advances in one area have often been matched by retreat in others.

The Syrian army has failed to make good its promise of retaking Aleppo, and has lost ground in recent days according to activists on the ground. This may have been a trigger for the recent ferocious bombing – the regime has often retaliated for losses of territory by bombing civilian areas.

“I believe that the regime is taking revenge on Aleppo after it failed in its military campaign which has failed recently to regain control,” said a spokesman for the Al-Shams news agency in Aleppo, who gave his name as Abu al-Mujahid.

“Maybe it is also a way of putting pressure on the opposition before the Geneva conference.”

Both Hizbollah and the Iraqi militias have concentrated their fighting on areas of Damascus and Homs provinces with large populations of the Shia minority, and Mr Assad has never been able to muster sufficient numbers of his own troops to sustain an assault on the wide northern front.

In an interview with Al-Jazeera television, the head of what is probably the strongest individual rebel brigade, Ahrar al-Sham, Hassan Aboud, repeated his insistence that neither he nor his allies would take any notice of the Geneva conference or any conclusions it might reach.

The government has said it will take part, along with the opposition in exile backed by the West, but it is not clear what Mr Assad’s negotiating position will be. He has promised presidential elections for 2014 but rejected demands he state in advance that he will not stand.

Meanwhile the conditions for the 2.5 million refugees abroad – more than a tenth of the population – and those who continue to be subject to the war’s ferocity continue to worsen.

“The field hospitals are pitiful,” Abu al-Mujahid said. “Hospitals cannot accommodate the wounded. People try to move the injuries to the Turkish hospitals but it’s far away. Some people die before arriving.

People are using civilian cars as we don’t have enough ambulances.

“Fear and panic dominates the city.”

The barrel bomb used by the Syrian Air Force during the Syrian civil war are typically made from a barrel that has been filled with TNT, and possibly shrapnel and oil, and then dropped from a helicopter. Due to the large amount of explosives that can be packed into a barrel the resulting detonation can be devastating.

The early versions used lit fuses and thus had to be carefully timed otherwise they would fail to explode before breaking apart on the ground, or explode too soon in the air, however later models had impact fuses.

Barrel bombs were first identified in August 2012, in particular through the video forensic work of Eliot Higgins (Brown Moses) Their existence was initially denied by the Syrian army and the Russians until a video surfaced from inside a moving helicopter showing a barrel bomb being lit and dropped onto a target by Syrian Air Force personnel.

Human Rights Watch has insisted that the employment of these weapons constitutes a war crime. According to Victoria Nuland, of the United States Department of State, barrel bombs are “incendiary bombs which contain flammable material that can be like napalm” or can be packed with nails and launched from the air or from a launcher. Russia has reportedly refused to back a text at the UN Security Council that would have condemned the Syrian President Bashar al-Assad for carrying out such indiscriminate attacks on civilian areas