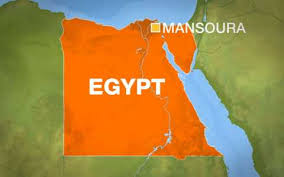 A powerful explosion believed to be caused by a car bomb rocked a police headquarters in a Nile Delta city north of Cairo early Tuesday, killing at least 14 people and injuring scores, according to the state news agency and a security official.

The interim government accused the Muslim Brotherhood of orchestrating the attack, branding it a “terrorist organization.”

The attack came a day after an al-Qaida-inspired group called on police and army personnel to desert or face death at the hands of its fighters.

The group and several others have claimed responsibility for a surge of attacks on security forces since the popularly backed July coup that toppled the country’s former Islamist president, Mohammed Morsi. In response, Egypt’s armed forces launched an offensive against militants in the Northern Sinai province in August.

MENA said the explosion took place at 1:10 a.m. at Daqahliya security headquarters in the Nile Delta province of Mansoura, collapsing part of the five-floor building. A security official says 14 people were killed and nearly 100 injured, including the city’s security chief. Most of those killed were police officers inside headquarters, their bodies buried beneath the debris.

It was the first major attack in the Nile Delta, spreading the carnage to a new area and bringing it closer to Cairo. Previous violence that killed scores of people happened in Sinai, or in Suez Canal-area cities such as Islamilia.

Security forces cordoned off the whole area, closed major entrances and exits to the city and set up checkpoints to search for perpetrators, the official said.

The death toll is expected to rise, a state official said, speaking on condition of anonymity because he was not authorized to speak to the press. State TV called on residents to rush to hospitals to donate blood.

The official added that the preliminary investigation indicated a car bomb caused the explosion.

Egypt’s Prime Minister Hazem el-Beblawi described the attack as a “terrorist incident,” and expressed condolences to the families of the victims and vowed that the perpetrators “will not escape justice.”

MENA said that the explosion damaged surrounding buildings, including a bank and a theater, and wrecked dozens of vehicles.

The same building was bombed weeks ago, but that explosion in front of the building caused no major casualties. Militant Islamists have attacked several security headquarters with car bombs or by suicide bombers.

The attack comes shortly after the Islamic militant group Ansar Beit al-Maqdis, or the Champions of Jerusalem, said it considers Egyptian troops to be infidels because they answer to the secular-leaning military-backed government.

The group and others based in the Sinai claimed responsibility for a number of suicide car bombings and deadly attacks on security headquarters, including a failed assassination attempt on Egypt’s Interior Minister in September using a suicide car bombing. The minister escaped unharmed.

Speaking at a public forum Monday, military spokesman Ahmed Mohammed Ali said the army crackdown has killed 184 militants and arrested 803 others. He said about 25 percent of those killed and arrested are foreign fighters, but didn’t provide further details. Ansar Beit al-Maqdis is believed to have ties with Palestinian militants in the neighboring Gaza Strip, and officials have said other foreign militants have found refuge in Sinai during the ongoing turmoil.

Ali also said troops have destroyed about 786 tunnels between Sinai and Gaza, which the government says are used to smuggle militants and weapons. The border crossing with Gaza has been mostly closed by Egypt and Israel since Hamas took over the tiny coastal territory in 2007. Gazans rely on the tunnels for access to many commercial goods.

“We have achieved great successes. We have impacted the main capabilities of the terrorists,” Ali told the gathering. “There are, however, still cells in there. We will continue to deal with them with resolve and seriousness.”

Ansar Beit al-Maqdis said it “will be more determined to fight” the military and police if its warning is ignored. It urged them to “repent” from participating in “this infidel bastion that is at war with God and his Prophet, and stop serving in its ranks.” Its statement was dated Sunday but appeared Monday on militant websites.

The group gained notoriety after expanding its operations outside of the restive northern Sinai province.

But MENA quoted Cabinet spokesman Shawki as defying the militants, saying “Such terrorist operations will not prevent us from moving forward with the road map.” He was referring to the upcoming referendum on a draft constitution Jan. 14-15, a key step in a military-backed transition plan aimed at holding presidential and parliamentarian elections later next year.