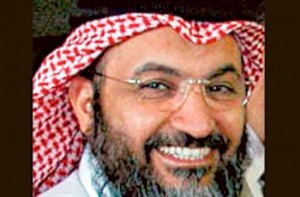 The US treasury department said it would impose sanctions on Abdul Rahman Bin Umair Al Nuaimi, a history professor in Qatar and president of Al Karama, for raising funds for Al Qaeda and its affiliates in Syria, Iraq, Somalia and Yemen that at times had amounted to millions of dollars per month.

The US measures against Mr Al Nuaimi could spur debate among prominent human rights groups such as Amnesty International and Human Rights Watch about their close association with Al Karama, which claims to monitor human-rights abuses in Arab countries.

Al Karama regularly criticises US allies in the Arab world including the UAE, Saudi Arabia and Egypt. The charges against Mr Al Nuaimi could also have a diplomatic impact on American ties in the region since Qatar is also a US ally.

Amnesty International acknowledged in an email yesterday that Al Karama has helped it in the past with information on cases of human rights abuse and added that it was “unable to confirm” the accuracy of the US allegations. Human Rights Watch declined to comment.

In its statement, the US treasury department labelled Mr Al Nuaimi as a “terrorist financier and facilitator”, freezing his US assets and prohibiting any US citizens from “doing business” with him. The US provided no evidence indicating how it reached its findings.

The treasury department charged that Mr Al Nuaimi “provided financial support” for more than a decade to Al Qaeda and groups affiliated with it, including Asbat Al Ansar – an Islamist faction operating out of a Palestinian refugee camp in Lebanon – and Al Shabab in Somalia.

It said Mr Al Nuaimi this year ordered the transfer of almost US$600,000 (Dh2.2 million) to Al Qaeda through its representative in Syria, Abu-Khalid Al Suri – a figure known to be close to Al Qaeda leader Ayman Al Zawahiri. Mr Al Nuaimi had planned to transfer another $50,000, according to the statement, which also alleged that he had passed information to Al Qaeda.

Furthermore, Mr Al Nuaimi raised “significant” financial support for Al Qaeda in Iraq and facilitated ties between the group’s leaders and Qatar-based donors, the US statement said. He oversaw the transfer of more than $2m a month to Al Qaeda in Iraq “for a period of time”, according to the US.

Mr Al Nuaimi and top figures at Al Karama did not return calls or emails seeking comment over the weekend. Mourad Dhina, Al Karama’s executive director, was quoted by the US news and commentary website The Daily Beast on Thursday as saying the sanctions came as a shock and were “not good news for us”.

However, in a statement posted on Al Karama’s website on Saturday, Mr Al Nuaimi rejected the US accusations and threatened to fight the claims “by all legal means”.

He said the charges were aimed at suppressing his objections to American actions in the Middle East and were “largely fed by repressive regimes in the region”.

Mr Al Nuaimi said the accusations “aim to silence me because of my publicly declared opposition to US policies in the Arab world and in particular in the Gulf area since the invasion of Iraq in 2003”.

He also said he would quit his post in Al Karama to avoid harming his group’s work.

This year, Al Karama has criticised Saudi Arabia for illegal detentions and condemned the UAE for jailing more than 65 people convicted of plotting an Islamist coup.

The US treasury department statement also issued sanctions against Abdul Wahab Mohammed Abdul Rahman Al Humayqani, charging he had used his Yemen-based charity as a cover for funnelling funds to Al Qaeda in the Arabian Peninsula, or AQAP.

Since mid-2011, Mr Al Humayqani has served as “the acting AQAP amir” in Yemen’s Al Bayda governorate, according to the US. It added that suspicions against Mr Al Humayqani include plotting to assassinate Yemeni officials.

The US statement also said the activities of Mr Al Nuaimi and Mr Al Humayqani were connected, alleging the former had given funds to the latter’s Yemeni charity in 2012.

Treasury department officials indicated that they may target other non-governmental organisations active in the Middle East which they suspect were involved in violence against the US or its Gulf allies.

David Cohen, the US under secretary for terrorism and financial intelligence, said in the statement: “We will continue to work with our partners in the Gulf to ensure that charitable organisations are not used to support violence in the region or elsewhere.”

According to Mr Al Nuaimi, the US move to simultaneously issue sanctions against him and Mr Al Humayqani may have been driven by Al Karama’s condemnation of US airstrikes against alleged militants in Yemen. He pledged to take legal action against the sanctions, including in US courts, and added he would be willing to talk to US authorities to dismiss their suspicions.

Mr Al Nuaimi also said he had been banned from entering several Arab countries because of his criticism of them. While he did not name them, Mr Dhina of Al Karama told The Daily Beast that they included Saudi Arabia.
The National