Castro calls on US to establish civilized relations with Cuba 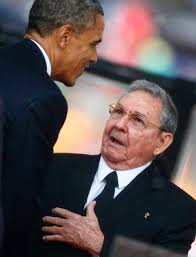 Cuban President Raul Castro on Saturday called on the United States to establish civilized relations with his country, recognizing a new tone in bilateral talks on secondary issues while reiterating that the country’s political and economic system were non-negotiable.

The United States and Cuba have appeared more positive of late as talks around immigration, postal services, disaster prevention and other security issues have taken place, with officials from both countries cautiously welcoming each other’s pragmatism and seriousness in interviews with Reuters.

Castro, closing a year-end meeting of the parliament, said that recently the two countries, bitter foes for more than half a century, had been able “to hold conversations on topics of mutual interest.”

“We think we can resolve other matters of interest,” he said, without elaborating.

Castro said that “a civilized relationship between both countries” was something “our people and the immense majority of U.S. citizens and Cuban immigrants desire.”

Castro’s speech came just two weeks after he and U.S. President Barack Obama shook hands at a memorial for the late Nelson Mandela.

The White House played down the handshake, saying it was unplanned and went no further than pleasantries.

Still, the meeting had resonance because of the surprise warming in recent months with several instances of cooperation.

U.S. and Cuban officials overcame a series of potentially divisive incidents this summer, including the interception of a shipment of Cuban weapons headed for North Korea, with mutual displays of prudent diplomacy rarely seen since the 1959 revolution that brought Fidel Castro to power.

At a fund-raising dinner in Miami last month, Obama said that it may be time for the United States to revise its policies toward Cuba, against which a trade embargo has been in place for more than half a century.

Obama questioned whether the policy that was put in place in 1961 remains an effective way of dealing with U.S. differences with the Communist-ruled island nation.

While Castro on Saturday seemed to be holding out an olive branch, at the same time he reiterated Cuba’s position, held since the 1959 revolution, that neither Cuba’s one-party rule, nor its economic system, were on the table.

“We do not demand that the United States change its political and social system, nor do we accept negotiating ours,” he said.

“If we really want to move forward in our bilateral relations, we have to learn to mutually respect our differences and become accustomed to peacefully living with them,” he said to applause from the parliament deputies.

A significant breakthrough in relations remains unlikely while Cuba continues to detain a U.S. government contractor, Alan Gross, who was arrested 4 years ago for what Cuba saw as a subversive effort to promote political change.

Gross said he was in Cuba to set up communications equipment to give unrestricted Internet access to Jewish groups. A Cuban judge said that activity was a crime against the state and sentenced Gross to 15 years.

It remains unclear what steps the Obama administration can take to obtain Gross’s release. Cuba has hinted it would release him in return for four Cubans jailed on espionage charges in the United States, but Washington has flatly ruled that out.