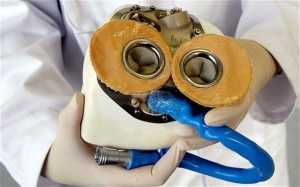 An artificial heart that can give patients up to five years of extra life has been successfully implanted for the first time.

The heart, powered by watch-style batteries that can be worn externally, was put into a patient at Paris’s Georges Pompidou Hospital.

It uses a range of “biomaterials”, including bovine tissue, to reduce the likelihood of the body rejecting it.

Unlike previous artificial hearts, created mainly for temporary use, the design by the French Carmat biomedical firm is intended to replace a real heart for as many as five years.

French medics said the unnamed male patient who received the device was awake and responding well after an operation on Wednesday. Marcello Conviti, the chief executive of Carmat, said: “We are delighted with this first implant, although it is premature to draw conclusions given that a single implant has been performed and that we are in the early post-operative phase.”

The artificial heart, developed with the help of engineers from the Dutch-based European Aeronautic Defence and Space Company (EADS), weighs 2lbs — almost three times as much as an average healthy human heart. It mimics heart muscle contractions and contains sensors that adapt the blood flow to the patient’s moves.

Inside the heart, surfaces that come into contact with human blood are made partly from bovine tissue instead of synthetic materials such as plastic, which can cause blood clots.

The new device could help thousands of people who die each year while waiting for a donor, including many in Britain. Nearly 100,000 people in Europe and the United States are in need of a heart transplant, according to Carmat. The company claims its device should enable hospital patients to return home and possibly even resume work.

Alain Carpentier, the surgeon who performed the implant, said: “It’s about giving patients a normal social life with the least dependence on medication as possible.

“We’ve already seen devices of this type but they had a relatively low autonomy. This heart will allow for more movement and less clotting. The study that is starting is being very closely watched in the medical field.” Heart failure affects more men than women, and the size of the artificial heart means it can fit in 86 per cent of men’s bodies but only about 20 per cent of women. However, Carmat says it can manufacture a smaller version to fit the more petite bodies of women as well as patients in India and China.

The artificial heart will raise France’s reputation as a country at the forefront of medical innovation.

In 2005, surgeons in France performed the first face transplant on Isabelle Dinoire, whose features were badly mutilated by a dog.

Marisol Touraine, France’s health minister, was quick to praise the operation as a sign of the country’s edge in the field of health care.

“This news brings great pride to France,” he said. “It shows we are pioneers in health care, that we can invent, that we can carry an innovation that will also bring great hope to plenty of people.”

Carmat won permission from the French authorities to test the human implants on four patients in three hospitals last September.

All were suffering from terminal heart failure.

While the intention is for each heart to keep a patient alive for five years, the success of the device in the trials will be judged on whether they survive with the implant for at least a month. Carmat hopes to finish human trials of the heart by the end of next year and to obtain approval to market the devices in the EU by early 2015.

It is expected to cost €140,000 (£120,000) to €180,000 (£150,000) if and when it goes on sale in Europe. The company’s shares have risen fivefold since floating on the Paris stock market in 2010. Among Carmat’s competitors in the race to perfect artificial heart implants are the privately-owned company, SynCardia Systems, and Abiomed, both of the United States.

The longest a patient has lived with a SynCardia heart is just under four years.

A spokesman for SynCardia said: “We’re very happy for them and we wish them the best in their pursuit.”