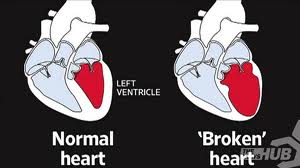 When Janet Ghise’s 14-year-old dog, Maggie died unexpectedly at a kennel while she was on vacation, she was devastated.

“She was just the nicest dog,” said Ghise.

So upset, she nearly died of a broken heart.

“I said to my husband, ‘I’m going to the doctor’s, to the cardiologist, to see if he can fix my broken heart.’ It’s exactly what I said,” Ghise said.

Luckily, she just happened to have a doctor’s appointment a few days later.

“To tell you the truth, I was really short of breath, but I didn’t put any weight on it. I thought, well, this is because I’m upset,” she said.

“She walked into the office, and she just did not look well,” said Dr. Jeffrey Friedel, a cardiologist. “She was very pale; she was breaking out in a cold sweat. She was short of breath, and she was complaining of a lot of chest pressure.”

He sent her to the hospital where a heart cath showed the problem, an actual illness called broken heart syndrome.

“The heart becomes severely weakened in a very characteristic shape, and it’s usually in response to an intensely stressful event,” said Dr. Friedel. “They can be in heart failure, they can be in shock; and in the worst case scenario, they can present in full cardiac arrest.”

The symptoms, EKG, and blood tests can be just like a heart attack. But it’s not.

It’s seen after the death of a loved one, after an argument, after extreme emotional turmoil.

What clinches the diagnosis is a distinctive appearance on the cath, a stagnant bulge in the lower part of the heart.

“There’s a whole section of the heart that has essentially ballooned outward and is not moving,” said Dr. Friedel. “And that’s clearly abnormal.”

“Usually, we’re expecting to find a blockage that we can fix, and get the heart to recover. So, yeah, it’s always a surprise,” he said. “Ten, 20 years ago, we never diagnosed it, we just didn’t know about it.”

Broken heart syndrome can be treated with medicines to strengthen pumping, lower the blood pressure, and slow the pulse. The vast majority of patients do well.

“The heart was healing, and it’s almost back to normal function,” said Ghise. “I’m feeling good.”