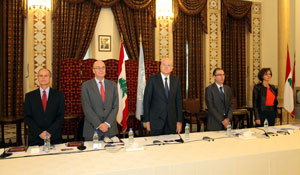 Lebanon’s government reiterated on Monday its plea to the international community to continue supporting the country in harboring Syrian refugees, while demanding that it is in need of around 1.850 billion dollars to tackle the repercussions of the Syrian crisis.

Caretaker Prime Minister Najib Mikati made the announcement during a meeting on the Syrian crisis at the Grand Serail with U.N. Special Coordinator for Lebanon Derek Plumbly, European Union Ambassador to Lebanon Angelina Eichhorst, Deputy Special Representative for Lebanon and U.N. Resident Coordinator Robert Watkins, and a number of Arab and foreign ambassadors.

The U.N. said Monday that $6.5 billion, a record amount, will be needed next year to cover a projected 4 million Syrian civil war refugees and the communities they have flooded into.

That is nearly double the 2,304,128 externally displaced people currently registered.

One-fifth of the people living in Lebanon’s borders are now refugees from Syria’s war.

That’s the official figure; the real one could be much much higher, as the U.N. count has typically not been able to keep up with the influx of people who have lost everything.

Their impoverishment is straining resources for locals as well.

The U.N. counts 842,500 registered Syrian war refugees in Lebanon, but hordes more are unregistered. The U.N. expects the official number to climb to 1.5 million next year. The same number of Lebanese will be in need of help, it says.

Lebanon hosts 36% of the refugees piling into countries in the region, and it’s a small country, with an official population of 4.4 million people, according to the World Bank.

An additional 52,000 Palestinians who were living in Syria have also taken refuge in Lebanon, the U.N.’s refugee agency said. This is in addition to the 450,000 Palestinian refugees who have been living here for decades in 12 camps spread across the country.

Nearly 300,000 of the Syrian refugees in Lebanon are school-age children, and the U.N. expects the number to more than double in 2014.

“The Syrian crisis remains a global issue, but its repercussions have affected Lebanon the most,” Mikati said.

“The Lebanese government and people have presented aid to the Syrian refugees beyond their means and they are still offering this aid, making Lebanon an example of a state that has fulfilled its humanitarian role towards the displaced,” he stressed.

“We hope that you will continue on backing this example,” he told the UN officials

But next year’s budget is only 5% funded so far, the United Nations says.

The Syrian crisis is pushing many locals toward desperation in the nation, which is politically polarized between those who oppose Syrian President Bashar al-Assad and those who support him. The Iranian-backed Hezbollah Shiite group is fighting alongside Assad’s soldiers against the mostly Sunni rebels trying to topple him.