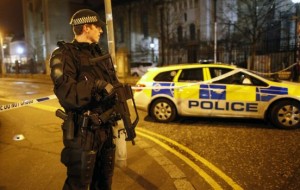 The Friday night attack injured nobody but highlighted the determination of truce-defying IRA members to disrupt economic and social life in the run-up to Christmas, the busiest time of the year for Northern Ireland’s economy.

The blast displayed a level of recklessness not seen in previous bombing bids. Police said a coded warning to a Belfast media organization misidentified the bomb’s location as outside a hotel, not a restaurant.

Amateur footage showed the bomb detonate within 100 yards (90 meters) of cordoned-off pedestrians in Belfast’s Cathedral Quarter. The district of cobblestoned streets was a ghost town during decades of full-fledged IRA violence and today is home to thriving pubs, nightclubs, boutique hotels and a trendy arts scene. The security alert disrupted shows at the nearby Metropolitan Arts Venue and obliged some diners to take their plates with them to eat in the cold outside.

The 20-member emergency response team of Belfast City Council was holding its annual Christmas dinner at a Cathedral Quarter restaurant outside the police’s security cordon, but abandoned the meal to open an evacuation center as soon as they heard the blast.

Most IRA members from the dominant faction, the Provisionals, ceased fire in 1997 and renounced violence in 2005 after killing nearly 1,800 people in a failed 27-year campaign to force Northern Ireland out of the United Kingdom.

But breakaway IRA factions remain determined to mount sporadic attacks in defiance of the British territory’s 1998 peace accord and the Catholic-Protestant government it inspired.

Police statistics show a sharp rise in attempted bombings since October, capped by a failed car-bomb attack on Belfast’s glitziest new shopping center, the glass-domed Victoria Square, on Nov. 24. Only the detonator of that 130-pound (60 kilogram) bomb exploded at the entrance to the mall’s underground parking lot.

The largest splinter group claimed responsibility Saturday for the backpack bomb in a coded telephone call to Belfast media. It made no reference to the inaccuracy of its earlier warning.

The group uses the name Oglaigh na hEireann (pronounced “OG-luh nuh ER-in”), which means “Irish Army” in Ireland’s little-used native language, Gaelic. Both the legitimate army of the Republic of Ireland and generations of outlawed IRA factions have used the name to claim they are the true armed forces of the island.

The Provisional IRA often increased attacks on the commercial heart of Belfast in the run-up to Christmas as part of its strategy to maximize economic damage.

Britain’s Cabinet minister responsible for Northern Ireland, Theresa Villiers, said the IRA remnants still planting bombs “want to drain the economic life from Belfast, but we will not let them succeed.”

Some analysts think the increased bombing is also timed to undermine the ongoing diplomatic mission of Richard Haass, a former senior U.S. State Department official who now leads the Council on Foreign Relations think tank in New York. Northern Ireland’s unity government invited Haass to try to resolve a series of disputes within the five-party coalition, a four-month mission facing a Christmas deadline to produce results.

Former Provisionals helping to run today’s government alongside the British Protestant majority have condemned the resumed bombing efforts as pointless.

“Those that voice support for these groups, whose only allegiance is to violence, need to come forward and explain to the people what they aim to achieve by this reckless action,” said Gerry Kelly, a former Provisional commander who helped launch the paramilitary group’s first car-bomb attacks on London in 1973. Today he sits in the Northern Ireland Assembly as a representative of Sinn Fein, the Irish nationalist party that grew from the ranks of the Provisionals into the major voice for Northern Ireland’s Catholics.