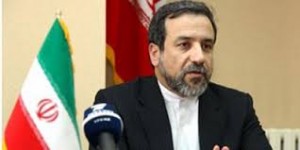 Iran said on Friday that a new U.S. measure targeting companies and individuals for supporting its nuclear program violated the spirit of a nuclear deal reached with major powers in Geneva last month.

“We are evaluating the situation and Iran will react accordingly to the new sanctions imposed on 19 companies and individuals. It is against the spirit of the Geneva deal,” deputy Foreign Minister Abbas Araghchi told the semi-official Fars news agency on Friday.

Araghchi, who is also a member of Iran’s nuclear negotiating team, was referring to a November 24 interim agreement with six world powers under which Tehran would curb its nuclear program in exchange for limited relief from economic sanctions over the next six months.

It was not clear if Araghchi’s remarks were related to the need for more time.

The U.S. Treasury and State Department said the blacklistings showed the Geneva deal “does not, and will not, interfere with our continued efforts to expose and disrupt those supporting Iran’s nuclear program or seeking to evade our sanctions.”

Some U.S. lawmakers want further sanctions on the Islamic state.

President Barack Obama’s campaign to hold off on new sanctions over Iran’s nuclear program won a key endorsement on Thursday when the chairman of the U.S. Senate Banking Committee rejected tightening measures against Iran now.

Iran has repeatedly said it will not be pressured, warning that new sanctions “could kill the deal”.

The new measure, the first such enforcement action since the first step agreement was reached in Geneva, targeted entities that are suspected of involvement in the proliferation of materials for weapons of mass destruction and have tried to evade the current sanctions.

Administration officials said Thursday’s targets include companies and individuals engaged in transactions on behalf of other companies that the United States has also previously designated under the sanctions. They include Mid Oil Asia, Singa Tankers, Siqiriya Maritime, Ferland Company Limited and Vitaly Sokolenko.

The powers who negotiated the interim deal on Iran’s nuclear program – Britain, China, France, Germany, Russia and the United States – are continuing negotiations with a goal of reaching a comprehensive final deal in six months.