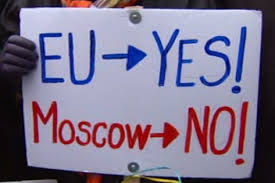 “We invite everyone to come to our rally at mid-day on Sunday,” said opposition leader Arseniy Yatsenyuk, as protestors on Kiev’s iconic Independence Square marked three weeks of demonstrations over the government’s decision to reject a historic EU deal.

The United States has threatened sanctions after the failed raid, in which several dozen were wounded.

Yanukovych’s refusal to sign an integration deal with the EU has plunged the ex-Soviet country into its deepest political crisis in a decade.

The president promised at talks with EU foreign policy chief Catherine Ashton on Thursday he would sign the pact, she said.

But he is set Tuesday to travel to Russia for new talks with Russian President Vladimir Putin after the two discussed a strategic partnership treaty last week, with any agreement sure to further inflame the opposition.

“The main item on our agenda is to prevent President Yanukovych from joining the Customs Union during his visit to Russia,” Yatsenyuk said at a Thursday briefing.

Putin said on Thursday Ukraine was still welcome to join work a Moscow-led Customs Union which he sees as a future alternative to the European Union.

“We are not imposing anything on anyone but if our friends want joint work we are ready for a continuation for that work at expert level,” Putin said in his annual address to the nation.

“Our integration project is based on equal rights, on real economic interests,” said Putin.

The EU has said it cannot sign a free-trade agreement with Ukraine if the ex-Soviet country became a member of the Customs Union.

Ashton, who met Yanukovych twice in Kiev in the last two days, said the Ukrainian leader “made it clear to me that he intends to sign the association agreement.”

The Ukraine government has never formally abandoned its plan to sign the deal.

EU Enlargement and Neighbourhood Policy Commissioner Stefan Fuele said that Brussels could help Kiev clinch an IMF loan if there was a firm commitment to sign the pact.

Brussels would offer talks to “examine in depth all issues related to the implementation of the agreement,” said Fuele after meeting with Ukraine’s Deputy Prime Minister Serhiy Arbuzov.

In addition, the EU could “facilitate and continue supporting Ukraine and its endeavour … to sign an agreement with the IMF,” he added.

After the most recent scuffles Washington upped the pressure by saying it was considering a range of options in response to the attempted crackdown.

“Sanctions are included but I am not going to outline specifics,” said State Department spokeswoman Jen Psaki.

“We will not forgive this. Here there will be millions and his regime is going to collapse,” Yatsenyuk, the leader of the party of jailed ex-premier Yulia Tymoshenko, told protesters after the raid.

The demonstrators fortified their positions overnight by filling sandbags with snow and pouring water over the barricades in sub-zero temperatures.

Protester Oleg Polivko said the failed raid “was a good lesson” for the authorities.

“They made their conclusions: you cannot fight with your own people,” he said.

“We have to last at least six more days,” called out singer Ruslana, who won the Eurovision contest in 2004 and has been an Independence Square fixture for days, performing the daily national anthem for protesters a capella.

The central square, where the Orange Revolution unfolded in 2004, forcing the scrapping of a fraud-tainted election and bringing a pro-Western government to power, swelled with hundreds of thousands of protesters at the weekend.

“Yanukovych is now down to two simple choices, either accept a deal with the EU/IMF or accept what has been tabled by Russia,” said economist Chris Weafer at consultants Macro Advisory.

“Either solution will lead to a much more divided Ukraine and almost kill off any chance for his re-election in February 2015.”

Yanukovych has called on the protest movement to renounce “ultimatums” and urged talks.

But the opposition, led by several figures including world boxing champion Vitali Klitschko, rejected the talks offer before Yanukovych dismissed his government and punished riot police.

“A civilised way out of the political crisis is early presidential and parliamentary elections,” said Klitschko.