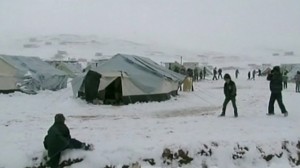 The harsh conditions faced by Syrian refugees have been highlighted with the first winter snowfalls in the Bekaa valley of northern Lebanon, where tens of thousands of Syrians are sheltering in tents.

A total of 838,000 Syrians have fled to Lebanon, living either in tented camps, unused buildings or with friends and family.

The bitterly cold weather has also halted a UN airlift of food and other humanitarian supplies from Iraq to Kurdish areas inside north-eastern Syria.

Twelve planeloads of supplies are due to be flown in, ahead of what the UN fears will be the region’s harshest winter in a century.

In another development human rights group Amnesty says European leaders should be ashamed by the paltry numbers of refugees from Syria they are prepared to resettle, .

Only 10 member states have offered to take in refugees and even then only 12,000, it complains. The UK and Italy have offered no places at all, it adds.

The bloc says its priority is providing help to Syria’s internally displaced people, now thought to number 6.5 million, and those hosted in other countries.

The UN estimates almost 2.3 million Syrians have fled to neighboring countries since March 2011.

Most Syrians who have fled their country have travelled to Lebanon, Jordan, Turkey and Iraq. But some 6,000 this year have reached EU member state Bulgaria, which has appealed for financial help from Brussels in responding to the influx.