Obama under fire in US over handshake with Castro 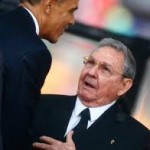 With a quick handshake, President Barack Obama and Cuban President Raul Castro whipped up a frenzy Tuesday that led many to wonder whether a shift is coming between the former Cold War nations.

Others just thought it was a nice thing to do.

Obama became the first U.S. president since 2000 to shake hands with a Cuban leader. The gesture came as the two took their seats at Nelson Mandela’s memorial service just before the fallen icon was eulogized.

The simple act generated a torrent of rage from some, including Cuban-American politicians who have fought to maintain the U.S. embargo against the island and remove the Castros from power.

Sen. Marco Rubio, R-Fla., the son of Cuban immigrants, said the president “should have asked (Castro) about those basic freedoms Mandela was associated with that are denied in Cuba.”

Rep. Ileana Ros-Lehtinen, R-Fla., who was born in Havana before her family moved to Miami, said it was “nauseating and disheartening” to see the handshake.

Rep. Mario Diaz-Balart, R-Fla., another son of Cuban immigrants, said “the president’s friendly demeanor with Raul Castro is reflective of his policies to the Castro regime and every other terrorist dictatorship.”

Social media was awash with comparisons to the 2009 encounter when Obama “bowed” to King Abdullah of Saudi Arabia and other encounters with foreign leaders.

“Why should you shake hands with somebody who’s keeping Americans in prison?” Sen. John McCain, R-Ariz., told Public Radio International. He was referring to Cuba holding an American international aid worker, Alan Gross, in a Cuban jail since Dec. 2009.

But others saw something far less nefarious going on in the stands at Johannesburg FNB Stadium.

“This was a funeral, and if the politicians in attendance used the occasion to state their gripes with each other, it would be disrespectful to South Africa and to Mandela,” said Philip Peters, president of the Cuba Research Center in Alexandria, Va..

Frank Calzon, executive director of the Washington-based Center for a Free Cuba, countered that Obama easily could have avoided a situation where he was forced to shake the hand of Castro.

“Anybody who’s been at the United Nations (could tell you) there are ways in which the people around the president work things out so he doesn’t have to come face to face with a murderer,” Calzon said.

Officially, the White House said the handshake was not planned, and that Obama and Castro simply “exchanged greetings” as they prepared for the memorial. Ben Rhodes, the president’s deputy national security adviser for strategic communications, said, “the president’s focus was on honoring the legacy of Nelson Mandela.”

During his speech, Obama made comments that could have been directed squarely on the Cuban regime.

“Around the world today, men and women are still imprisoned for their political beliefs, and are still persecuted for what they look like, or how they worship, or who they love,” Obama said during his eulogy. “There are too many leaders who claim solidarity with Madiba’s struggle for freedom, but do not tolerate dissent from their own people.”

During his speech, Obama made comments that could have been directed squarely on the Cuban regime.
“Around the world today, men and women are still imprisoned for their political beliefs, and are still persecuted for what they look like, or how they worship, or who they love,” Obama said during his eulogy. “There are too many leaders who claim solidarity with Madiba’s struggle for freedom, but do not tolerate dissent from their own people.”

And there is a debate to have about the easing of restrictions on Cuba instituted under Obama. Shortly after assuming office, Obama made it easier for Cuban-Americans to visit their relatives on the island and send money to them – moves that infuriated Republicans who feel those moves only give more money and staying power to the Castro regime.

Former Democratic President Jimmy Carter saw the handshake as “something significant” that could represent an “omen for the future,” according to CNN.

Cuba watchers doubted, however, whether Tuesday’s handshake means anything to that process.

“The handshake does not change U.S. policy, and when Cubans see it on television all they will see is that our President acted like a gentleman at a solemn event,” Peters said.