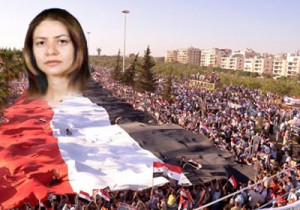 Masked gunmen abducted a leading Syrian human rights lawyer and three other prominent activists in a rebel-held Damascus suburb Tuesday in a new sign that al-Qaida linked militants who have joined the fight against President Bashar Assad are trying to silence rivals in the opposition movement.

Razan Zaytouni, one of the most outspoken critics of President Bashar Assad as well as Islamic militants who have gained increasing sway over the fight to oust the government, was seized along with her husband and two other colleagues from her office in Douma.

No group claimed responsibility for the kidnapping, but Zaytouni herself had publicly blamed al-Qaida linked rebels for kidnapping activists and colleagues said she had received indirect threats from extremists in recent days.

With just about a month to go before the start of internationally brokered peace talks to end the civil war, Assad’s forces have stepped up a punishing offensive against rebels in a mountainous region near the border with Lebanon.

On Tuesday, the government showed off its victory over rebels in Nabek, taking media, including The Associated Press, to the town a day after it was captured. Nabek lies on the main Damascus-Homs highway, about 80 kilometers (50 miles) away from the capital.

Most of the buildings in the town were partially or totally destroyed, and graffiti promoting the al-Qaida umbrella group known as the Islamic State of Iraq and the Levant was sprayed on the walls.

Glass littered the ground. Telephone and electricity cables torn from overhead poles were strewn across the streets and sidewalks. Some cars were smashed; others were stolen.

Some residents who had fled the town were starting to return even though distant gunshots could be heard and black smoke rose from nearby Yabroud as activists said Syrian troops pounded the area with airstrikes and artillery.

Akef Abdul-Salam, 65, who was returning to check on his house, said: “They broke my TV set and tore the curtains. Why? Is it because we didn’t support them?”

“We do love our country and our leadership,” he added.

Yabroud, where opposition fighters are believed to be holding a group of abducted nuns, is the last significant rebel stronghold in the Qalamoun area, according to the Britain-based Syrian Observatory for Human Rights.

The Islamic State of Iraq and the Levant and another al-Qaida affiliated group, Jabhat al-Nusra, have emerged as some of the most powerful groups fighting to topple Assad.

Their growing influence, as well as a spate of kidnappings of local activists and foreign journalists blamed on ISIL, have tarnished the reputation of the Syrian opposition and alarmed Western countries, dampening their support for the anti-Assad struggle.

The government has gained momentum after agreeing to surrender its chemical weapons stocks in order to avert threatened U.S. airstrikes. The Jan. 22 peace conference to be held in Switzerland would be the first face-to-face talks between Assad’s government and its opponents since the conflict began.

Rebel groups also are engaged in a power struggle with the mainstream Western-backed Free Syrian Army and other, more moderate brigades, and the two sides have repeatedly clashed in recent months.

Scores of activists have disappeared in the past few months and at least two have been killed, most in areas dominated by extremist rebels.

Zaytouni, who is among the few well-known opposition activists to remain in the country throughout the 3-year-old conflict, published an article earlier this month on a Lebanese news website in which she blamed ISIL for more than 90 percent of the kidnappings carried out in recent weeks in rebel-held areas.

The group is “continuing the role that the Syrian regime started in liquidating activists and pushing those who remain to exile,” she wrote.

Zaytouni stayed in the country but was forced to go into hiding shortly after the revolt against Assad began in March 2011. That year, she was awarded the Anna Politkovskaya Award for risking her life by breaking the government’s media blackout to report on the brutal crackdown in Syria.

“We hold all the battalions and brigades in the region responsible for the safety of our people in Eastern Ghouta (a Damascus suburb that includes Douma) and the safety of Razan Zaytouni and all those kidnapped with her,” the LCC said in a statement, calling Zaytouni a “symbol of the Syrian revolution.”

Zaytouni is also general coordinator of the Violations Documentation Center in Syria, which keeps track of the casualties of the Syrian conflict and has recorded atrocities committed by both sides of the conflict.

“The arrest of Samira, Razan, Wael and Nazem is an insult to the Syrian revolution,” Saleh posted on his Facebook page.

Fares Mohammed, a Lebanon-based Syrian activist with the LCC, said the gunmen also seized laptops from the office. He said Zaytouni had been receiving indirect threats by Islamic extremists recently, including hostile graffiti.

Separately on Tuesday, the families of two Spanish journalists abducted in Syria nearly three months ago appealed publicly for their release, identifying their captors as ISIL members.

Veteran reporter Javier Espinosa, Middle East bureau chief of El Mundo newspaper, and Ricardo Garcia Vilanova, a freelance photographer who was traveling with him, were taken captive Sept. 16 at a checkpoint near the town of Tal Abyad, in the northeastern Raqqa province near the Turkish border.

The two men join a long list of journalists who have been kidnapped while covering Syria, which according to press advocacy groups has become the most dangerous country in the world for reporters over the past two years.

Photo: Razan Zaytouni. Has been a member of the team of lawyers for defense of political prisoners since 2001. In the same year, Razan was one of the founders of the Human Rights Association in Syria (HRAS). In 2005, she established SHRIL (the Syrian Human Rights Information Link), through which she continues to report about human rights violations in Syria. Since 2005, has also been an active member of the Committee to Support Families of Political Prisoners in Syria. In 2011, she was awarded the Sakharov Prize jointly with four other Arabs. She was previously awarded the Anna Politkovskaya award by Reach All Women in War. In 2013 she secured the International Women of Courage Award.