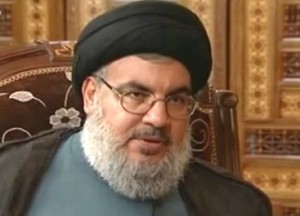 Hezbollah chief Sayyed Hassan Nasrallah praised during an interview Tuesday evening with OTV the Iranian Nuclear deal with the west and said it has very big implications.

“Iran’s agreement with the West has very big implications.” He said

“The biggest winner is the people of the region because they were pushing for the option of war with Iran, which is not an easy or simple and would have led to very dangerous repercussions on the entire region. .” The Hezbollah chief added

“Iran has survived despite the sanctions and I do not think that Israel will be bombing the Iranian nuclear facilities without an American green light”.

“The Americans asked to open other files during the nuclear negotiation but the Iranians insisted on limiting the debate,” he said adding “from now on, no single nation can make decisions and settle things on its own”

Commenting on the Saudi Iranian tense relations he said:

“Iran has been trying for years to open the doors with Saudi Arabia, but all attempts have failed so far.”

“Iran is the top country in the region and our relationship with it are friendly . Iran does not interfere in our internal affairs and we do not consult on in any internal issue while March 14 acts on orders from Saudi Arabia”..
Commenting on the tense relations with the Arabian Gulf countries he said
“The Iranians wanted to reassure the Gulf countries that the deal was not reached at their expense.”

As in the past speeches he launched a vehement attack against Saudi Arabia:

“If you monitor all the Saudi-financed media outlets you will find that the Saudi war against Iran has never stopped. The Saudis waged wars against the Iranians in Pakistan, Afghanistan, the Gulf, Iraq and Syria, and of course through its proxies, because it does not dare to wage a direct war.”

He added: “Saudi Arabia’s problem with Iran is not of a sectarian nature, because it had problems with several Arab countries, and these countries are Sunni, not Shiite.” He said

Saudi Arabia’s war on the Muslim Brotherhood is a political war because it wants to be the leader of the Muslim world and it does not accept any partners. He added.

“We’re still in a disagreement with Qatar over Syria but we not seeking problems with anyone, even with Saudi Arabia.” He added
and revealed that Hezbollah met with a Qatari delegation during the past few days.

And added : ” We sat with the Qatari envoy and told him that the military choice in Syria is futile and the attempt to oust Assad militarily is an act of madness, that’s why I call on all countries to contribute towards finding a political solution. We also spoke of neutralizing Lebanon in the Syrian crisis.”

He defended his Syrian role by claiming that Hezbollah were defending the Lebanese in Syrian town and villages:

“We trained them and armed them. The residents of these towns were the first to fight, not Hezbollah fighters.”

In May 2013, only a few months ago, those Lebanese had no more capacity to defend themselves.

The destruction of the Sayyida Zeinab Shrine [in southern Damascus] could have led to a sectarian war in the region. We sent 40 to 50 fighters to Sayyida Zeinab.

We had to increase the number of fighters in Syria after a while. he said

Contrary to the reports that Iran ordered Hezbollah to intervene in Syria he claimed it was Hezbollah’s own decision.

“We did not enter Syria upon the request of Iran. It was our own decision.”

“If we withdraw from Syria, from Qusayr and Qalamoun, then the border would fall in the hands of the armed groups. Car bombs will target all of Lebanon, not only Dahiyeh.” He said in referenc eto the recent bombings in Hezbollah strongholds

“We are protecting Lebanon”. Nasrallah claimed

“If Syria falls into the hands of these armed groups, what will be Lebanon’s fate?” he asked

We intervened militarily when the revolution was stolen by the Takfiris . He stressed.

The Shiites call the Sunnis takfiris and visa versa

According to the report, a commander of the Free Syrian Army announced that members of Jabhat Al-Nusra, an Islamist Sunni rebel group linked to Al Qaeda, succeeded in the early morning hours on Saturday of blowing up the headquarters where Nasrallah lives in Bint Jbeil, Lebanon.