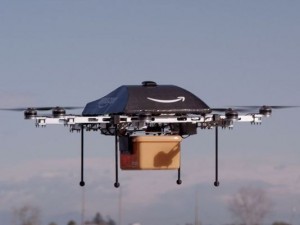 The idea would be to deliver packages as quickly as possible using the small, unmanned aircraft, through a service the company is calling Prime Air, the CEO said.

Bezos played a demo video on 60 Minutes that showed how these aircraft, also known as octocopters, will pick up packages in small yellow buckets at Amazon’s fulfillment centers and fly through the air to deliver items to customers after they hit the buy button online at Amazon.com. Check out the video here.

The goal of the new delivery system is to get packages into customers’ hands in 30 minutes or less, the world’s largest Internet retailer said. Putting Prime Air into commercial use will take “some number of years” as Amazon develops the technology further and waits for the Federal Aviation Administration to come up with rules and regulations, the company added.

Bezos told 60 Minutes that the service could be up and running in three to four years — although he noted that he is an optimist when it comes to such things.

This is the latest futuristic effort by Bezos, who was an e-commerce pioneer in the 1990s and more recently popularized the e-reader — while pursuing personal projects such as affordable space flight and a 10,000 year clock build inside a mountain.

Drones have mostly been used by the U.S. military to shoot missiles at enemy combatants in countries such as Afghanistan and Pakistan. However, the cost of these unmanned aircraft has dropped precipitously in recent years, making them more accessible to commercial users, such as companies, small businesses and entrepreneurs.

However, the FAA currently limits the use of drones in the U.S. to hobbyists, meaning the devices cannot be used in return for payment. The regulator said recently that it plans to have regulations governing commercial use in place by 2015.

If drone delivery takes off, it could be a threat to FedEx and UPS, which Amazon uses for a lot of its deliveries now. Indeed, FedEx founder Fred Smith told Wired magazine in 2009 that the company wanted to switch their fleet to drones as soon as possible but that it had to wait for the FAA to regulate such activity. 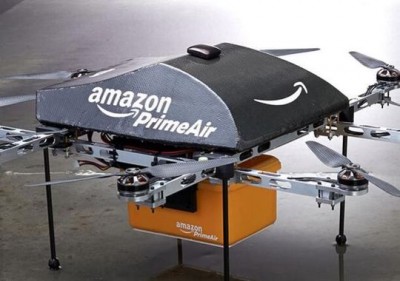 The Bezos interview, with Charlie Rose, came just before the most important online shopping day of the year, Cyber Monday. This is a crucial period for Amazon, but this year the world’s largest Internet retailer’s holiday push has been tarnished by strikes in Germany and a BBC report questioning working conditions in the company’s U.K. warehouses.