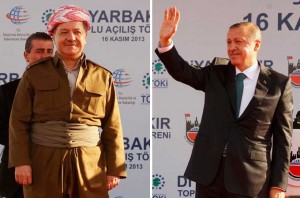 Turkey and Iraqi Kurdistan signed a multi-billion-dollar energy package this week that will help transform the semi-autonomous region into an oil and gas powerhouse but infuriate the central government in Baghdad.

The move follows months of negotiations and was learned from sources close to the deal on Friday after being kept secret. Baghdad says any independent Kurdish oil exports are illegal and that it has the sole authority to manage Iraqi oil.

For energy-hungry Turkey, dependent on imports for almost all of its needs, exploiting Iraqi Kurdistan’s rich hydrocarbon resources will help diversify its energy supplies and reduce the country’s ballooning $60 billion energy bill.

Ankara’s close partnership with Iraqi Kurds is historic and to many, marks the beginning of a new era, given the decades-long fight with Kurdish militants on Turkish soil that has claimed more than 40,000 lives.

The deal came in the early hours of a frosty Wednesday morning in Ankara, and was signed during a three-hour meeting between Kurdistan Regional Government (KRG) Prime Minister Nechirvan Barzani and Turkish Prime Minister Tayyip Erdogan.

“This is the most comprehensive energy deal in Turkey’s history,” a source close to the matter said. “But due to political sensitivities, both sides are taking their time to announce it.”

Officials in the office of Iraq’s deputy prime minister for energy, Hussain al-Shahristani, were not immediately available for comment.

Sources say neither the Turks nor the Kurds wanted to pop the champagne while efforts to get the Iraqi central government on board continue, even though Baghdad can do nothing to stop the process.

Baghdad has long claimed the sole authority to manage Iraqi oil and says Kurdish efforts towards oil independence could lead to the break-up of Iraq. Turkey’s courtship of Kurds has also raised concern in Washington.

But Turkey has repeatedly said it respects Iraq’s sensitivities over territorial integrity and that increasing oil revenues will help the whole of Iraq.

Oil exports from the Kurdish region via an Iraq-Turkey pipeline had dried up due to a row over the sharing of oil revenues. The deal between Turkey and the Kurds also offers a solution to the payment problems.

Crude flow in the KRG’s new pipeline is to start soon, and will link with the 40-inch-wide existing Kirkuk-Ceyhan pipeline to be exported to world markets.

As part of the deal, state-backed Turkish Energy Company (TEC), which Ankara set up to work in northern Iraq, has signed a contract to operate in 13 exploration blocks. In about half of those, it is teaming up with U.S. oil giant ExxonMobil (XOM.N).

The contracts also envisage the building of a new oil pipeline and a gas pipeline, aimed at helping the region’s oil exports climb to 1 million barrels per day by 2015. The gas flow is likely to start by early 2017.

Under the deal, payments for the KRG’s oil will be collected in an escrow account at a Turkish state bank. Once the contractor fees are paid, the balance will remain untouched until the KRG and Baghdad reach a deal on revenue sharing.

Comments by the KRG natural resources minister, Ashti Hawrami, last week that the money belongs to the whole of Iraq “could trigger a new era in Iraq and finally get the two sides to agree on a revenue-sharing plan in line with the constitution”, another source close to the deal said.

The KRG has long proposed taking 17 percent of Iraq’s total oil revenues and leaving the rest to Baghdad, a distribution that takes its justification from an article in the Iraqi constitution based on population count.

“The key aspect of these deals is the transparency. The metering of the exports, the payments are all open for international audit and Baghdad can come and observe if they wish to do so,” the first source said.

The contracts confirm earlier plans to build a second pipeline for Kurdish oil via Turkey as well as imports of Kurdish oil and gas. They also finalize the deal on Turkey’s partnership in 13 exploration blocks in northern Iraq.

Turkey will have priority to import the KRG’s oil through an established nominal amount, while the rest of the oil produced will be marketed internationally.

The KRG will market its own oil and bargain with prospective customers but TEC will be able to assist in handling cargoes between storage tanks and loading onto tankers.

Turkey will be able to purchase up to 20 billion cubic meters per year of Kurdish gas through a new pipeline to be built via Turkey. The imports are expected to start by early 2017 and Anglo-Turkish Genel Energy (GENL.L) is likely to be the first company to export.

Kurdish gas will be bought at a cheaper price than those of Turkey’s current suppliers. It buys natural gas from Iran, Azerbaijan and Russia via pipelines and liquefied natural gas from Algeria and Nigeria.