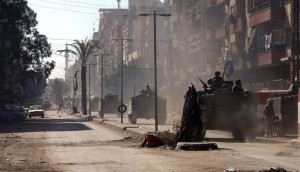 Four people have been killed in Lebanon’s northern city of Tripoli in exchanges of gunfire between neighborhoods backing rival sides in Syria’s civil war, security and medical sources have said.

The dead included a teenage schoolboy and a man in his 30s, according to the Reuters news agency.

Thirty people, including five soldiers, were wounded in the shooting between gunmen in Bab al-Tabbaneh and the adjacent Alawite neighbourhood of Jebel Mohsen, which supports the Alawite Syrian leader, Reuters reported.

Sniper shots and rocket fire could still be heard at around 2.30pm (1230 GMT), four hours after the fighting broke out, residents said.

The fighting followed repeated attacks on Alawites in Tripoli, residents said. Several people were shot and wounded in separate incidents this week, and Alawite men were beaten in an attack on a bus earlier in November.

Lebanon’s caretaker Prime Minister Najib Mikati, a Sunni Muslim from Tripoli, held talks with the interior minister and other security officials in the Mediterranean city to discuss how to end the violence, which erupted despite the deployment of soldiers in both rival districts.

The divisions in Tripoli, 30km from the Syrian border, reflect the sectarian gulf across Lebanon over Syria’s
civil war.

But the northern city, where tensions between the Sunni Muslim majority and small Alawite community have festered for decades, has seen some of the heaviest violence this year.

Two car bombs in August killed 42 people and wounded hundreds at Sunni mosques in Tripoli, just a week after a car bomb in a Shia area of Beirut, the Lebanese capital, killed 27 people.

Clashes between fighters in Bab al-Tabbaneh and Jebel Mohsen have flared several times in recent months, killing dozens since the beginning of the year.

In the Bekaa Valley, the Lebanese army said it defused three 107-millimetre Grad rockets on Friday near the northeastern town of al-Qaa near the Syrian border. It said the rockets were ready for launching when they were discovered.

Suspected supporters of the Syrian rebels have fired several rockets at Shia targets in the area, saying they were in response to the intervention by Lebanon’s Shia Hezbollah militia in Syria’s civil war. The conflict has also drawn in Sunni Muslim fighters from across the Middle East.