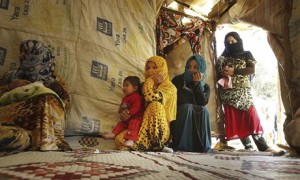 At least 17471 Syrian refugees have entered Lebanon between November 14th and 25th due to the battle in Syria’s Al-Qalamoun mountains , Social Affairs Ministry revealed on Thursday

“The Social Affairs Ministry has registered around 17,471 refugees between November 14th and 25th, due to the unrest in Syria’s Al-Qalamoun,” the ministry said in a statement.

The statement mentioned that 17390 have entered the Beqaa area of Arsal and 81 sought refuge in Shebaa.

The ministry announced that it has established “a cell to coordinate relief work in cooperation with the UNHCR and concerned institutions.”

“The ministry is also working with the UNHCR to set up a reception area for refugees that fits 70 tents and is discussing the possibility of setting up another reception area in Arsal that fits 100 tents with Dar al-Fatwa.”

The UN refugee agency UNHCR has registered more than 813,000 Syrians in Lebanon, but unofficial reports put the number of Syrians in the country at over one and a half million.
NOW