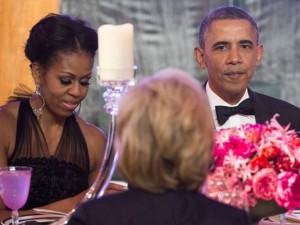 Here’s one first lady who has no interest in being president.

Walters touched off the discussion by asking President Obama: Don’t you think the first lady would have made a better president?

Obama came up with the right response in terms of domestic harmony: “Of course ... That’s an easy question!”

The president added that his wife is “smart enough” to avoid all the hassles associated with running for the job.

For her part, Mrs. Obama questioned whether she has her husband’s level of passion, focus, tenacity, and calm needed for the post of chief of executive.

Former first lady Hillary Rodham Clinton won a U.S. Senate seat in 2000, sought the presidency in 2008 but lost the Democratic nomination to Obama, and may run for the job again in 2016.

ABC’s Good Morning America ran a clip from an interview to air Friday night on 20/20.

During the interview taped last week, Mrs. Obama said she tries to make the residential part of the White House a “sanctuary” from the rigors of the presidency.

Daughters Malia and Sasha make it easier for Obama to get away from it all. Mrs. Obama told Walters that when they are home, the daughters don’t talk about issues of the day.

“They are talking about issues of their day,” Mrs. Obama said.