After feverishly trying to derail the international community’s nuclear deal with Iran in recent weeks, Israeli Prime Minister Benjamin Netanyahu now has little choice but to accept an agreement that he has derided as deeply flawed.

Netanyahu believes the six-month deal leaves Iran’s military nuclear capabilities largely intact, while giving Iran relief from painful economic sanctions, undermining negotiations on the next stage. At the same time, Israel’s strongest piece of leverage, the threat of a military strike on Iran, seems to be out of the question despite Netanyahu’s insistence it would remain on the table.

He said Israel was not bound by the agreement, and reiterated Israel’s right to “defend itself by itself,” a veiled reference to a possible military strike against Iran.

Netanyahu has spent years warning the world against the dangers of a nuclear-armed Iran, calling it an existential threat due to Iranian references to Israel’s destruction, its support of hostile militant groups on Israel’s borders and its development of missiles capable of reaching Israel and beyond.

Israel also believes that a nuclear-armed Iran will provide militant groups like Lebanon’s Hezbollah an “umbrella” of protection that will embolden them to carry out attacks.

As momentum for a deal built the past week, Netanyahu delivered speech after speech and held meeting after meeting, urging the world to seek better terms from Iran. Last week, he hosted French President Francois Hollande, then rushed off to Moscow for talks with President Vladimir Putin in a last-ditch attempt to alter the agreement.

Netanyahu had said that any deal must ensure that Iran’s enriching of uranium _ a key step toward making a nuclear bomb _ must end. He also said all enriched material should be removed from the Islamic Republic, and called for the demolition of a plutonium reactor under construction. 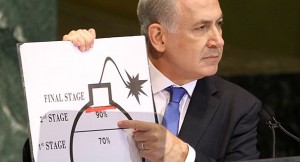 But after the deal was announced, it was clear that Netanyahu made little headway. While freezing parts of Iran’s enrichment capabilities, it will leave others, including the centrifuges that are used for enrichment, intact. The deal relies heavily on Iranian goodwill, a still-to-be-defined system of international inspections and the continued pain of sanctions that remain in place.

Yoel Guzansky, who used to monitor the Iranian nuclear program for Israel’s National Security Council, said a deal that would satisfy Israel was unlikely from the outset due to differing “red lines” between Israel and the U.S.

While Israel sees any enrichment as a cause for concern, the U.S. was willing to tolerate nuclear development as long as it was unable to produce weapons, said Guzansky, who is now an analyst at the Institute for National Security Studies, a Tel Aviv think tank.

“It’s a bad agreement because of what it symbolizes,” he said. “It means Iran is getting an acceptance, a signature that it’s a legitimate country.” Even worse for Israel, he added, the agreement amounts to “acceptance of Iran as a nuclear threshold state.”

U.S. officials said Sunday’s deal was just a first step and further negotiations aim for a final agreement that would prevent any threat from Iran’s nuclear program.

They said the relief from sanctions was minimal and that the most biting economic measures, including sanctions on Iran’s vital oil industry, remained in place and more could be imposed if Iran fails to follow through.

Guzansky predicted that despite the tough rhetoric, Israel would move quickly to repair relations with the U.S., its closest and most important ally, and do everything possible to influence the outcome of the world’s final-status talks with Iran.

That could include speeches, threats of military action or behind-the-scenes diplomacy. Israel is not a direct participant in the talks but remains in close contact with many of the negotiators.

The relationship with the U.S. will be critical as Israel conducts peace talks with the Palestinians in the coming months. U.S. Secretary of State John Kerry, who is mediating the talks, has set an April target date for reaching an agreement, and there is widespread speculation that the Americans will step up their involvement as the deadline approaches.

“How can Israel, after the entire international community sat with Iran, shook hands with Iran and signed an agreement, operate independently?” he said. “It will be seen as someone who sabotages 10 years of trying to get Iran to the table and trying to get a deal.”

Enrichment is at the heart of the dispute because it can be used for peaceful purposes or for producing a nuclear bomb. Tehran insists its nuclear program is for civilian usage such as energy production and cancer treatment.

Uranium at low levels of enrichment, up to 20 percent, is used in research or generating electricity. Uranium must be enriched to a far higher level _ above 90 percent _ to produce a warhead. So far, Iran is not known to have produced any at that level, but Israel argues that the technology for doing so is the same as that for enriching at lower levels.

Under the compromise, enrichment would be capped at the 5 percent level, and Iran’s stockpile of 20 percent uranium would be “neutralized,” effectively preventing it from reaching weapons-grade level. Also construction on the plutonium reactor is to be suspended. The White House also promised “intrusive monitoring” of Iranian nuclear facilities.

Israel says any enriched uranium in Iranian hands is potentially dangerous, since its centrifuges can quickly convert it to weapons grade. Israel believes that Iran’s ability to keep its nuclear infrastructure intact will allow it to can quickly resume the program if the later talks fail.

Ephraim Asculai, a former official at Israel’s Atomic Energy Commission, said Sunday’s agreement was not all bad for Israel, since it capped enrichment activity and slowed construction of the plutonium reactor. But he said Iran’s ability to “break out” and make a nuclear explosive device remained intact, perhaps in as little as four to six months once a decision is made.

“The good part of the deal is that enrichment stops at the present level and that is also some of the bad news because enrichment does go on,” he said.