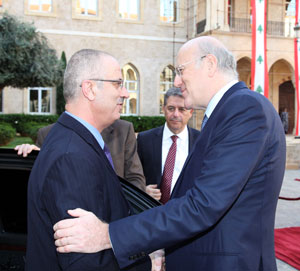 The visiting Palestinian Prime Minister Rami al-Hamdallah stressed on Thursday that Palestinians in refugee camps are under the control of the Lebanese state and pointed out that they are keen to safeguard security and stability in the country.

“Any violations that occur are individual and are not linked to us,” he added.

In turn, Mikati welcomed his Palestinian counterpart who arrived earlier in the day at the Grand Serail, and said that “it is an honor for Lebanon to defend the Palestinians’ rights.”

However, Lebanon’s PM urged for a “reduction of illegal acts inside the Palestinian camps.”

Two Palestinians were arrested Sunday in Ain Al-Hilweh as they were planting an improvised explosive device near a residence belonging to members of Hezbollah’s Resistance Brigades.

About 450, 000 Palestinians live in Lebanon . They like all the Palestinian refugees in the neighboring Arab countries are descendants of the hundreds of thousands who fled or were driven from their homes in the war that followed Israel’s creation in 1948. They remain in Lebanon’s 12 refugee camps because Israel and the Palestinians have never reached a deal that would enable them to return to their homes that are now in Israel.