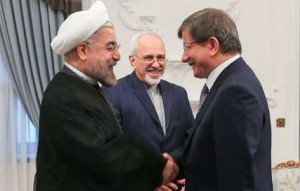 The foreign ministers of Turkey and Iran called on Wednesday for a ceasefire in Syria before peace talks in Geneva scheduled for January 22, Iranian media reported.

“All our efforts are to end the conflict and for a ceasefire if possible, even before the Geneva 2 conference takes place,” Iranian Foreign Minister Mohammad Javad Zarif told a news conference in Tehran with his Turkish counterpart Ahmad Davutoglu, Mehr news agency reported.

Davutoglu said: “We should not wait for this two months” before the peace conference convenes. “The Syrian people are in a worsening situation.”

Iran and Turkey support opposing sides in the 2-1/2-year-old Syrian conflict, but the joint ceasefire call suggests the regional rivals are now more willing to work together.

Iran, which along with Russia is the main backer of Syrian President Bashar al-Assad, has said it is prepared to take part in the Syria peace talks in Geneva if invited.

The Syrian government has said it will attend the talks but will not bow to Western demands for Assad to step aside.

Assad’s opponents are divided over the peace talks. General Salim Idriss, who commands the rebel Free Syrian Army, said his group would not take part in them and would fight on regardless.