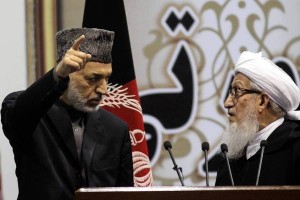 In a face-to-face rebuke to Afghan President Hamid Karzai, a grand council of Afghan dignitaries voted Sunday to recommend approval of a proposed 10-year security accord with the United States by the end of the year, agreeing to an American-imposed deadline.

The white-bearded chairman of the advisory council, or loya jirga, told Karzai that he miscalculated by threatening a signing delay until spring. Chairman Sibghatullah Mojaddedi lectured Karzai, warning that if he delays signing, “I’ll resign and leave the country.”

“If he had listened to my advice, we wouldn’t have this problem today,” Mojaddedi, 89, a former Afghan president and long-time confidant and mentor to Karzai, said as the president sat stiffly a few paces away.

But Karzai remained adamant that he — or his successor — will not sign the accord until after the Afghan presidential election in April. That stubborn stance has infuriated U.S. officials, who on Friday imposed a Dec. 31 deadline.

Karzai asked the loya jirga, whose recommendations are not legally binding, for more time to negotiate. “We’ll try to bargain more with the Americans on your behalf” and then sign the agreement months later, he said.

He said he wanted to apply more political pressure so that Afghanistan doesn’t sign the agreement “for free,” or without forcing American concessions. Providing few specifics, he also said he would not sign unless the U.S. takes a stronger role in Afghanistan’s moribund peace talks with the Taliban and promotes “transparency” in the April elections.

His voice rising in indignation, Karzai said he would never sign unless U.S. military stops entering Afghan homes in search of insurgents, a practice known as night raids. “Starting today, the United States cannot raid Afghan homes. If they enter Afghan homes one more time, this agreement is over,” he said.

The Afghan president is notorious for ultimatums and delaying tactics that seek to extract concessions and keep himself at the center of events. With his term ending in April, he is about to enter a lame-duck period — especially if he signs the accord soon.

The loya jirga’s bold defiance of Karzai presents an opportunity for the mercurial president to save face and back down from the brinkmanship that has put the security deal in jeopardy. Mojaddedi assured Karzai: “If there is a problem in the future” with the pact, “the jirga is responsible.”

Karzai convened the loya jirga, an influential traditional body, to give himself political cover and deflect responsibility for a long-term commitment with the United States, according to many Afghan analysts. He faces significant opposition from Afghan traditionalists who condemn cooperation with foreigners, especially the United States.

The coalition took the unusual step of accusing Karzai of lying about civilian casualties for political advantage. That reflected the souring state of U.S. relations with Karzai, who said of the United States on Thursday: “I don’t trust them and they don’t trust me.”

Karzai dug in his heels last week over night raids, just hours after agreeing with U.S. Secretary of State John F. Kerry on the text of the draft, 24-page security pact. President Obama responded with a personal letter to Karzai that pledged U.S. troops would enter Afghan homes only under “extraordinary circumstances” and if American lives were at direct risk.

Mojaddedi confronted Karzai after the president joined him onstage Sunday, reminding him that the U.S. had provided written assurances on night raids. The loya jirga proposed attaching Obama’s letter to the text of the Bilateral Security Agreement as a way to mollify Karzai.

“I repeat: The United States cannot enter Afghan homes and kill people,” Karzai told the chairman, turning to face him on the assembly stage. Mojaddedi, gesticulating forcefully, again told Karzai, whom he called his “son and student,” to accept U.S. assurances and sign now, not later.

Karzai muttered “All right,” and abruptly left the stage.

Mojaddedi emerged as the council’s star. A studious man with owlish spectacles who refers to himself as “Professor,” he told delegates that Karzai “respects me and kisses my hand in public.” He said his untamed white beard is hard-earned proof of his wisdom.

Mojaddedi, Afghanistan’s president in 1992, said he delivered half of Karzai’s votes in the contested 2009 election. If Karzai rejects his advice, he said, he’ll resign as chairman and as Karzai’s advisor “because of the wrong policies of this Afghan government.”

The loya jirga said in its formal declaration that Karzai should sign by the end of the year. It recommended several additions to the pact, among them the release of 19 Afghans from the U.S. detention center at Guantanamo Bay and a stronger U.S. pledge to defend Afghanistan from any incursion from a neighbor, particularly Pakistan.

The loya jirga, whose delegates were essentially handpicked by Karzai, also voted to ask the U.S. military to add a U.S.-Afghan base to the nine that would be occupied by U.S. troops under the proposed pact after combat forces depart Afghanistan at the end of next year.

The base is in Bamian province in central Afghanistan, a population center for Hazaras, a Shiite Muslim minority whose members were massacred by the Taliban. Afghan analysts said Hazara delegates proposed the Bamian base.

The agreement still requires the approval of the parliament. Karzai will decide when to present it to the legislature, which is expected to endorse it.

Approval by the loya jirga capped a fraught six-day showdown between Karzai and the United States that began with tense phone negotiations between Karzai and Kerry on Tuesday. It culminated in Kerry’s blunt warning to Karzai on Friday that the U.S. would leave no troops after 2014 if Karzai defied the deadline. That would mean a drastic cut in billions of dollars in military and development aid to Afghanistan.

That threat panicked many Afghans, including wealthy businessmen. Most of the 50 loya jirga committee chairpersons who spoke Sunday urged Karzai to sign the pact quickly to avoid an economic and security collapse at a time when the Taliban insurgency remains potent.

The agreement would allow the U.S. to deploy military advisors to train and equip Afghan security forces, along with U.S. special operations troops for counter-terrorism missions against Al Qaeda and other terrorist groups.

The U.S. ambassador here, James B. Cunningham, attended the loya jirga and said he was gratified by the “overwhelmingly offered support” for the security pact.

Many ordinary Afghans, who have dismissed the gathering as a waste of money, said Karzai should have just signed the deal instead of closing down Kabul for a six-day national holiday and clogging the streets with security forces.

“The government spent a lot of money and blocked the whole city for a week, and now Karzai says he wouldn’t sign until after the elections?” said Noor Ahmad Shah, 54, a cook who watched the loya jirga on TV in a bakery near the meeting site. He said he wanted Karzai to sign immediately so his children would have a safer future.

Karzai “overreached” by miscalculating sentiments of the loya jirga and the Afghan people, said Waliullah Rahmani, director of the Kabul Center for Strategic Studies. He said most Afghans recognize that the country cannot survive without U.S. military and cash assistance, along with the international commitment the post-2014 U.S. presence would bring.

“I don’t think President Karzai expected this,” Rahmani said. “He won’t be able to resist the national will of the Afghan people, as expressed today through the loya jirga.”

Photo: Afghan President Hamid Karzai (L) talks with Sibghatullah Mujadadi the chairman of Loya Jirga (Grand Assembly) during the concluding day of the Jirga in Kabul, Afghanistan, 24 November 2013. The Loya Jirga on 24 November, called for President Hamid Karzai to sign a security agreement with the United States by the end of the year. The crucial endorsement of the draft bilateral security deal by the 2,500 elders meeting in Kabul came after four days of deliberations in a Loya Jirga, or Grand Assembly.