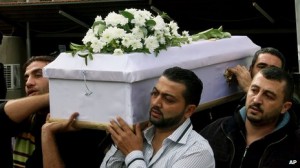 More than 11,000 children have died in Syria’s civil war in nearly three years, including hundreds targeted by snipers, a new report says.

Summary executions and torture have also been used against children as young as one, the London-based Oxford Research Group think tank says.

The report says the majority of children have been killed by bombs or shells in their own neighbourhoods.

It wants fighters trained in how not to put civilians’ lives at risk.

‘Plea to all sides’
Their report, Stolen Futures – the Hidden Toll of Child Casualties in Syria, examines data from the start of the conflict in March 2011 to August 2013.

Some 764 were summarily executed, and more than 100 – including infants – were tortured, the report says.

Boys outnumbered girls among the dead by around two to one. Boys aged 13 to 17 were most likely to be victims of targeted killings, the report says.

The highest number of child deaths occurred in the governorate of Aleppo, where 2,223 were reported killed.

Report co-author Hana Salama said that the way children are being killed is disturbing.

“Bombed in their homes, in their communities, during day-to-day activities such as waiting in bread lines or attending school.

“Shot by bullets in crossfire, targeted by snipers, summarily executed, even gassed and tortured,” she said.The data was provided by Syrian civil society groups recording casualties.

The report only considers the deaths of named victims, and only cases where the cause of death could be identified.

But it stresses the figures are incomplete as access is impossible in some areas.

The figures should be “treated with caution and considered provisional: briefly put, it is too soon to say whether they are too high or too low”, the report says.

The conflict in Syria has had a “catastrophic effect” on children in Syria, the report says, and calls for all sides to refrain from targeting civilians and buildings such as schools, hospitals and places of worship.

Amongst its recommendations, the Oxford Research Group also calls for access and protection for journalists and others contributing to the recording of casualties.

More than 100,000 people are estimated to have been killed in the conflict.

More than two million Syrians have fled the country; around half of those are believed to be children.