Over 160 Syrian rebels killed as they try to break siege 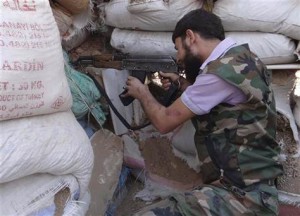 Heavy clashes between Syrian troops and rebels trying to break a government siege in the suburbs of Damascus have killed at least 160 fighters over two days, activists said Sunday.

Forces loyal to Syrian President Bashar Assad have laid siege for months to rebel strongholds in the Ghouta area east of Damascus, preventing food, clean water, medicine and other supplies from entering in a bid to crush resistance.

The tactic, which activists say has led to famine, has helped government troops capture a string of rebel-held areas over the past month on Damascus’ doorstep.

The government push around the capital has coincided with gains by Assad’s forces around the northern city of Aleppo as well as a new offensive in the rugged Qalamoun region north of Damascus.

The recent victories have shifted the momentum of the conflict in Assad’s favor and given the Syrian leader greater leverage in proposed peace talks that the U.S. and Russia are trying to convene to end the civil war.

The intense fighting in the eastern Ghouta area began on Friday when several rebel groups attacked government forces, according to the British-based Syrian Observatory for Human Rights and an activist based in Qalamoun. The activist spoke on condition of anonymity for fear of government reprisals.

There was no word on the battle from government media.

Observatory director Rami Abdurrahman said the rebels were trying to open the road between Ghouta and the outside.

He said more than 160 fighters were killed Friday and Saturday, including nearly 100 rebels, most of them from al-Qaida-linked groups, the Nusra Front and the Islamic State of Iraq and the Levant.

Among the more than 60 fighters killed on the government side were 20 gunmen from the Iraqi Shiite Abu al-Fadl al-Abbas brigade, he said.

Abdurrahman bases his information on a network of activists on the ground, as well as employees of military hospitals who fill him in on army casualties.

The death toll is unusually high for such a short period, testifying to the ferocity of the fighting.

It also points to the increasingly sectarian nature of the conflict, with Sunni Muslim radicals bolstering rebel ranks and Shiite militants from Iraq and Lebanon fighting on the government side.

Abdurrahman also said that at least two Syrian media activists were killed as they covered the clashes in eastern Ghouta.

One of those was Ammar Tabajo, who provided information to many Western-based media outlets over the past three years, using the alias Mohammed Saeed. Abdurrahman and the Local Coordination Committees activist group confirmed Tabajo had been killed.

Tabajo played an instrumental role, particularly in the early phases of the uprising, as a source of information for the media, and was a rare activist who appeared regularly on Arab TV stations. He was one of the first to report on the Aug. 21 chemical weapons attack, going to makeshift clinics to observe the aftermath.