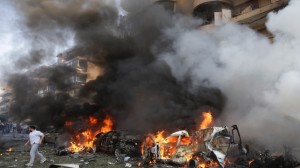 Beirut, Lebanon — Twin bombings against Iran’s embassy in Hezbollah’s Beirut stronghold point to a confrontation between Tehran and Al-Qaeda in Lebanon, which is paying a heavy price for the Syrian war, analysts said.

“It is a direct confrontation between Al-Qaeda on one side, and all those who back the Syrian regime and Iran on the other,” said Hilal al-Khashan, a political science professor at the American University of Beirut.

“The two blasts are a direct message to Iran that says: ‘You are the origin of the problem in Syria, we will face you directly, not by proxy.'”

The embassy of Iran, which supports Hezbollah and backs Syria’s President Bashar al-Assad, is in south Beirut.

At least 25 people were killed and nearly 150 wounded on Tuesday when suicide bombers attacked the embassy, located in a stronghold of the powerful Lebanese Shiite movement Hezbollah.

The Al-Qaeda-linked Abdullah Azzam brigade claimed responsibility for the attack.

It came after two car bombs in south Beirut in summer. One of them, on August 15, killed 27 people.

“Despite the tight, effective security measures taken by the authorities in Lebanon, Lebanon and Syria’s (territories) are open to each other via uncontrolled borders. It is not difficult for terrorists to cross over,” said Khashan.

The professor pointed to recent reports that “large numbers of fighters from the (jihadist) Islamic State of Iraq and the Levant (ISIL) and Al-Qaeda have crossed over into Lebanon and specifically Beirut”.

Political tensions in Lebanon have soared in recent months, as the Syrian war has raged on.

Because of the divisions, Lebanon has been unable for seven months to appoint a new government that all sides can agree on.

This was due to the influence of Hezbollah, which has grown stronger in the past three years, while the Syrian conflict has “paralysed the Lebanese institutions”.

In recent years, Hezbollah has systematically weakened Lebanon’s official institutions by refusing to give up its massive arsenal and by demanding a majority in government.

More recently, it broke Lebanon’s policy of neutrality in Syria by sending fighters in.

And as Syria’s war has escalated and increasingly involved regional powers, Al-Qaeda has been trying to “take advantage… as usual”, said Shaikh.

The Sunni extremist group “comes in and does some horrible things”, trying to benefit from “the Syrian vacuum,” he added, comparing the situation to that of Iraq.

The kingdom’s media has been waging a fierce campaign against Iran over its role in Syria, while Tehran has adopted Assad’s accusations against Riyadh and Doha that they back “terrorists” in Syria.

Francois Burgat, former head of the French Institute of the Near East, said the Beirut blasts were “a sign of the demoralisation and rage of extremists… over the involvement of Hezbollah and Iran on the side of the Syrian regime.”

Hezbollah and Iran’s involvement in the war have played a “defining” role in the struggle, helping Assad’s troops to advance towards Damascus and Aleppo.

As Sunni-Shiite tensions escalate, there are fears of the return of violence similar to Lebanon’s 1975-1990 civil war.

“Al-Qaeda vs Iran: the face-off in Lebanon,” read a headline in the An-Nahar newspaper, warning such a confrontation risks pushing the country to the brink.

“This latest terrorist (act) represents a… dangerous turning point” that throws Lebanon “into an open regional confrontation,” it said.

Khashan said the consequences of Tuesday’s attack would affect Syria as well as Lebanon.

“Al-Qaeda wants a security vacuum, but that benefits neither Iran nor Saudi Arabia,” he told AFP.

According to Shaikh, the Lebanese “have no interest in this becoming an intra-Lebanese civil conflict”.

He explained that while it was the Arab-Israeli conflict that led the Lebanese to all-out war in the late 1970s and early 1980s, the Syrian conflict is pushing Lebanon in that direction today.

“We may get there in the future… (But) we are not there yet and we have to hold our breath,” Shaikh said.