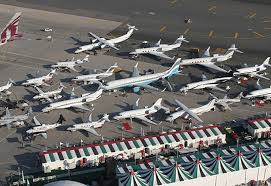 Senior Iranian aviation executives were at the Dubai Airshow in a discreet campaign to update their aging passenger jets this week, even as Iran negotiated with international powers to ease economic sanctions over its nuclear program.

Under moderate President Hassan Rouhani, there has been increasing hope the talks in Geneva could secure a breakthrough in the decade-long nuclear stand-off, leading to relief from embargoes that have crippled Iran’s airlines.

Iranian airlines are banned from buying new passenger planes from the world’s two manufacturing giants, Airbus and Boeing, and rely on through purchases from third parties.

But easing the ban on sales of spare parts has been on the agenda of nuclear talks since 2006, and according to Western diplomats, remains part of a package of sanctions relief if an agreement is reached on curbing Iran’s nuclear activities.

The West says the nuclear program is aimed at developing atomic weapons, but Iran says it is solely for the purpose of power generation and medical research.

Dozens of Iranian executives made private visits to the Middle East’s largest aviation show in Dubai this week, their gaze on everything from Airbus’s $400 million double-decker A380s to smaller essentials such as life jackets, inflight entertainment systems and coffee-makers for catering services.

But it is mostly a case of window-shopping, as big purchases still are well beyond the reach of Iranian carriers.

“Clearly Iran’s aviation industry is in desperate need for new planes and spare parts and other technology necessary for travel in Iran and abroad,” said Theodore Karasik, research director at Dubai think-tank INEGMA. “If sanctions are lifted in this industry, it would be an outstanding humanitarian gesture to the Islamic Republic.”

A large country rich in natural resources and boasting one of the largest populations in the Middle East, the Islamic Republic would in normal circumstances be a flourishing market for air travel.

Instead, Iran’s air industry tells a story of worsening safety, grounded aircraft and fare rises, which in turn are curbing demand.

Some Iranian visitors have negotiated deals at the show but are reluctant to talk openly, industry sources said.

“There are quite a lot of Iranians here who are interested in all sectors of the industry. The big Iranian airlines are also here to do business,” said an Iranian visitor at the airshow who called himself Mr. Fa’al. He works for a servicing and spare parts company in Iran.

“The situation is of course difficult but not impossible. We hope it’s going to get better under Rouhani, but it all depends on whether they accept Iran’s nuclear rights,” he added.

There are more than a dozen large airlines operating in Iran and several more fledgling carriers. The state carrier Iran Air has a fleet of about 40 planes including nine Boeing 747 jets, some of which were built before the Islamic Revolution in 1979.

The safety record for the carriers has resulted in most Iranian flights no longer being able to land within the EU.

There were about 14 aircraft crashes involving Iranian planes reported in the decade to January 2011, with hundreds of civilians killed and many more injured.

In October 2011, the pilot of an Iran Air plane averted disaster by landing without the forward landing gear. But for his skill, the tragic statistics could have been worse.

The head of one private Iranian airline recently said most of Iran’s passenger planes were out of service.

“More than 60 percent of Iran’s (passenger) airplanes in the country which have the average age of 22 years are grounded because of technical and logistical problems,” said Cyrus Baheri, director general of Iran Airtours airline.

Airline officials periodically announce the purchase of second-hand Airbus aircraft, mostly older A320 and A340 models, and are also heavily reliant on Russian-built passengers planes.

The airline sanctions were put in place under President Bill Clinton in 1995. During nuclear negotiations last year, the international powers – United States, Russia, China, France, Britain and Germany – held out the prospect of relief from the airline sanctions if Tehran curbed its nuclear program.

Since the election of Rouhani, there has even been talk of attempts to resume direct flights to the United States.

Earlier this week, the head of Iran’s Civil Aviation Organization, Ali Reza Jahangirian, said everything was ready for the resumption of direct flights and it was simply a question of waiting for the government’s final approval.

“We are currently waiting for the cue from the country’s political authorities to put the flight into operation,” he said, Fars news agency reported.

However, such statements overlook myriad issues that need to be ironed out before such a route could be re-established. Safety is likely to be a significant obstacle, as are sanctions that bar all financial transactions between U.S. and Iranian companies, unless given exemption.

But some remain upbeat and await the green light.

“Upon lifting of sanctions there will not only be aircraft orders but various purchases… a vast spending spree on life jackets for the existing fleet, landing gear, aircraft engines, training and even flight maps, to name a few,” said an aviation consultant whose clients include Iranian carriers.

Mahan Air, one of the leading Iranian airlines, said it was very hopeful of the ongoing talks.

“We are very encouraged by the diplomatic discussions taking place. Sanctions have made the purchase of spare parts and new aircraft challenging,” said the airline spokesman. “Hopefully, the easing of sanctions will give us an opportunity to offer more destinations to our passengers,” he added.