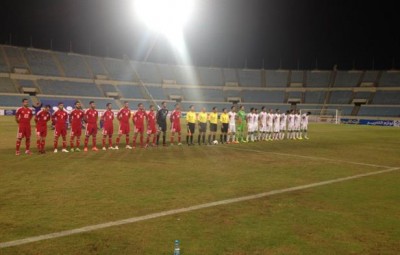 The 2015 Asian Cup qualification soccer match  between the Lebanese and Iranian national teams will go ahead in Beirut in an empty stadium despite the latest bombing attacks targeting the Iranian embassy.

It will be held Tuesday evening without spectators at Beirut’s Cite Sportive for security reasons, according to AFP

AFP also reported that the Iranian soccer delegation requested strict security measures to protect its national team during the match.

Two explosions, at least one caused by a suicide bomber, rocked Iran’s embassy in Lebanon on Tuesday, killing at least 23 people, including an Iranian cultural attaché, and hurling bodies, cars and debris across the street, Reuters reported on Tuesday.

A Lebanese-based al Qaeda-linked group known as the Abdullah Azzam Brigades claimed responsibility for what it described as a double suicide attack on the Iranian mission in southern Beirut.

Syrian Information Minister Omran Zoabi implicitly blamed Saudi Arabia and Qatar for supporting radical militants, who have been accused for previous attacks against Shi’ite targets, but Iran and Hezbollah blamed Israel for the attack.