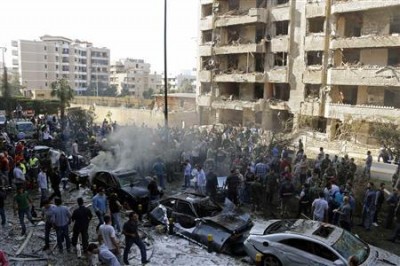 Two explosions, at least one caused by a suicide bomber, rocked Iran’s embassy in Lebanon on Tuesday, killing at least 23 people, including an Iranian cultural attaché, and hurling bodies, cars and debris across the street.
A Lebanese-based al Qaeda-linked group known as the Abdullah Azzam Brigades claimed responsibility for what it described as a double suicide attack on the Iranian mission in southern Beirut.

Lebanon has suffered a series of bomb attacks and clashes linked to the 2-1/2-year-old conflict in neighboring Syria.

Security camera footage showed a man in an explosives belt rushing towards the outer wall of the embassy before blowing himself up, Lebanese officials said. They said the second explosion was caused by a car bomb parked two buildings away from the compound.

In a Twitter post, Sheikh Sirajeddine Zuraiqat, the religious guide of the Abdullah Azzam Brigades, said the group had carried out the attack. “It was a double martyrdom operation by two of the Sunni heroes of Lebanon,” he wrote.

Syrian rebel groups, some linked to al Qaeda, have threatened to take their battle from Syria to Lebanon in response to the military involvement of Iran and its Lebanese Shi’ite guerrilla ally Hezbollah alongside Assad’s forces.

Iran’s ambassador Ghazanfar Roknabadi said it was clear the attacks targeted his embassy and identified one of the dead as Ebrahim Ansari, a cultural attaché who was on his way to work at the diplomatic compound when the bombs exploded.

“At one entrance of the Iranian embassy I counted six bodies outside,” Reuters television cameraman Issam Abdullah said. “I saw body parts…thrown two streets away. There is huge damage.”

The embassy’s sturdy metal gate was twisted by the blasts.

Fires engulfed cars outside the embassy and the facades of some buildings were torn off. Carpets of shattered glass from nearby buildings covered the bloodied streets and some trees were uprooted, but the embassy’s well-fortified building itself suffered relatively minor damage.

Soldiers in camouflage, firefighters and paramedics all rushed to the scene to evacuate the wounded.

The attack followed car bombings in Sunni and Shi’ite Muslim strongholds in Beirut and the northern city of Tripoli in August, in which a total of at least 66 people were killed.

“Whoever carries out such an attack in these sensitive circumstances, from whichever faction, knows directly or indirectly that he is serving the interests of the Zionist entity (Israel),” Iranian ambassador Roknabadi said.

He did not say whether other embassy officials were among the dead, but Lebanese televisions quoted Iranian diplomatic sources saying none of their staff inside the embassy was hurt.

Footage from local news channels showed charred bodies on the ground as flames rose from stricken vehicles. Emergency workers and residents carried victims away in blankets.

Hezbollah official Ali Ammar said the attack would not deter the group, known by its supporters as the “resistance”.

“Whoever did this is a monstrous terrorist,” he said. “The resistance message is that it will continue. It will continue in all its efforts to defeat Israel and defeat the terrorists.”

Shi’ite Iran has been bank-rolling Assad’s fight against the mainly Sunni rebels and has given military support to the president’s forces. It also supports Hezbollah in Lebanon.

Southern Beirut, a Hezbollah stronghold, was hit by three explosions earlier this year. Those attacks were blamed on groups linked to the Syrian rebels, believed to be in retaliation for the group’s involvement in Syria’s civil war.

Hezbollah fighters have played a crucial combat role for Assad in several battles, but their involvement has increased sectarian tension in Syria and in Lebanon.

Mostly Sunni Syrian rebels have been supported by foreign jihadi fighters in their struggle to topple Assad, who is from the minority Alawite sect, an offshoot of Shi’ite Islam.

Many in Lebanon’s Sunni community want to see Assad overthrown, while many of its Shi’ites, especially Hezbollah supporters, are equally determined that he survive.

Photo: Soldiers, policemen and medical personnel gather at the site of explosions near the Iranian embassy (L) in Beirut November 19, 2013. REUTERS/ Mohamed Azakir