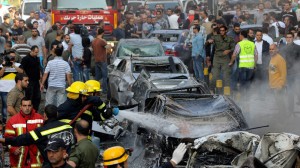 An al-Qaeda-linked group in Lebanon claimed responsibility for an attack Tuesday on the Iranian embassy in southern Beirut that killed 23 people, including an Iranian cultural attaché.

The dual blasts outside the fortified compound injured 146 people, the Health Ministry said. Lebanese television cited Iranian diplomatic sources as saying none of the staff inside the embassy was hurt, Reuters reports.

The obscure group Abdullah Azzam Brigades claimed responsibility for the attack in a post on Twitter and on a militant website. The group said it will continue the attacks until the Iranian-backed Shi`ite group Hezbollah withdraws its fighters from the Syrian civil war.

Violence from neighboring Syria’s two-and-a-half-year civil war has spilled over into Lebanon in recent months as Shi`ite supporters of Iranian-backed President Bashar Assad, and Sunni supporters of the rebel groups in Syria, which include al Qaeda affiliates, carry on a proxy battle in Lebanon.

Car bombings in August in Sunni and Shi`ite strongholds in the northern city of Tripoli killed at least 66 people, and explosions in southern Beirut, a Shi`ite stronghold, earlier this year were linked to Syrian rebel groups.

Photo: Civil Defense personnel extinguish a fire on cars at the site of explosions near the Iranian embassy in Beirut November 19, 2013.(Reuters / Mahmoud Kheir)