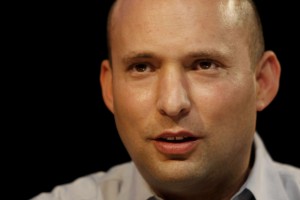 An Israeli cabinet minister said world powers will take heed of his government’s concerns about a deal with Iran even as a former security adviser warned that Israel could still take matters into its own hands with a military strike.

Israeli officials, led by Prime Minister Benjamin Netanyahu, have railed against the proposal world powers offered to Iran in Geneva earlier this month, saying it wouldn’t prevent Iran from pursuing nuclear weapons that would threaten the Jewish state’s survival. At a news conference with French President Francois Hollande yesterday, Netanyahu said it was “my duty to prevent anyone from credibly threatening or executing another Holocaust against the Jewish people.”

Israel’s warnings about the proposed nuclear deal “will have a positive impact,” Economy Minister Naftali Bennett said today on Army Radio. “Israel aspires to a good deal. Israel’s goal is that the deal will dismantle Iran’s nuclear machine and won’t just put it on hold for a few months.”

Netanyahu has said the Jewish state may consider a preemptive strike on Iran’s nuclear facilities if diplomacy fails. His former National Security Adviser Yaakov Amidror told the Financial Times in an interview published yesterday that Israel’s air force has been preparing for a possible military confrontation with Iran and could halt its nuclear weapons capability for “a very long time.”

Bennett, he said, appeared to refer to amendments to the proposal offered in Geneva, including a “tougher stance” on an unfinished heavy-water plant that can produce plutonium and uranium Iran has enriched. Both substances can be used to make bombs.

The Haaretz daily, citing unidentified U.S. sources, reported today that Iran will now be asked to halt construction on the Arak heavy-water plant and cap all uranium enrichment at 19.75 percent. Nuclear experts say uranium enriched to 20 percent can be converted into weapons-grade uranium within months.

Daily Inspections
Iran would also have to submit to inspections of its nuclear facilities, some daily, to ensure it honors its commitments, the newspaper said. The Iranians deny their nuclear work is a cover to build bombs and say they aim to produce energy and isotopes for medical research.

The offer to Iran didn’t produce an accord, and negotiators are to meet again in Geneva on Nov. 20. The deal that was on the table earlier this month would have relaxed some of the international sanctions on Iran in return for restrictions on its nuclear work.

Netanyahu has criticized the proposal for not requiring Iran to halt its uranium enrichment and plutonium operations. He said yesterday that he was “gravely concerned that this deal will go through.”

Netanyahu says relaxing sanctions is a bad idea because it would lessen Iran’s incentive to curtail its nuclear program further.

“You’re going to get investors, companies and countries scrambling one after the other to try to get deals with Iran, because economies and prices work on future expectations,” he said in an interview on CNN’s “State of the Union” broadcast yesterday.

Strained Ties
Israel’s vocal criticism of the proposal has strained relations with the Obama administration. U.S. Secretary of State John Kerry has called Israel’s protests premature, saying that given time, the U.S. will “be able to present the good deal that will be able to protect Israel, protect our interests, protect the region.”

Kerry, who met with Netanyahu in Jerusalem earlier this month, is due to return for another round of talks on Nov. 22.

Hollande is paying a first presidential visit to the area, and today met with Palestinian leaders in the West Bank city of Ramallah, where he urged Israel to stop building on lands the Palestinians claim for a state.