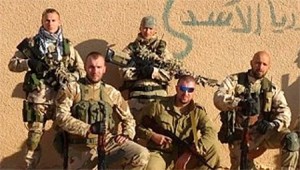 Ironically in the very week when amendments to the Russian Criminal Code stiffened the penalties for citizens in “illegal armed units” fighting abroad in a clear move against jihadists heading for Syria to join the rebels, it emerged that Russian mercenaries were working for the Assad regime.

The changes to Article 208 of the Criminal Code, on “The Organization of, or Participation in, Illegal Armed Units,” stipulates a new maximum prison term of six years. It reflects an awareness that jihadists from the turbulent North Caucasus are fighting alongside the rebels. According to Sergei Smirnov, first deputy director of the Federal Security Service (FSB), there are currently 300-400 Russian citizens participating in the rebellion, whom Moscow habitually calls “mercenaries” even though they appear driven by religious fervor rather than profit.

Since October, though, serious reports from rebel sources have been circulating alleging the presence of Russian mercenaries supporting the Syrian government. The Islamic State of Iraq and al Sham (ISIS), an Al-Qaeda affiliate, claimed to have killed several when it attacked a convoy of reinforcements heading to Al-Sukhnah in eastern Syria. They further released documents, pictures and a video they claimed were captured show a killed mercenary, one Aleksei Malyuta.

An investigation by the St Petersburg newspaper Fontanka—which has since been translated into English by The Interpreter—proved on the one hand that Malyuta was alive and well, but on the other that a private military company (PMC) called the Slavic Corps had indeed been engaged to provide armed support. The claim was that they were purely providing guard services to free up regime troops, but given the relative quality of veteran Russian mercenaries (the Corps boasts of hiring men with “experience of work in Iraq, Afghanistan, Eastern Africa, Tajikistan, Northern Caucasus, Serbia etc”) with the demoralized and under-trained Syrian regulars, this would hardly seem especially cost-effective.

Russia is already relaxing its controls on corporate security forces and deputy prime minister Dmitry Rogozin has floated the notion of state-supported PMCs that could act as additional tools of the Kremlin. Although the details of the nature and ownership of the Slavic Corps is unclear (there is a Slavic Corps Ltd registered in Hong Kong, and the Moran Security Group that appears to have contracted them), its own website specifically notes that it obtains government clearance before undertaking operations and Moran is run by a former KGB and FSB officer. In short, it is difficult to sustain any notion that at the very least the Russian government gave this its blessing.

This comes in the context of a range of covert and semi-covert forms of support being extended to Damascus, from banking services to weapons and everything in between. Russian military technicians appear to be working in Syria’s air defense system, GRU military intelligence are helping their Syrian counterparts and the Foreign Intelligence Service’s Zaslon special forces are reportedly there if need be to protect Moscow’s interests. However, at a time when the Kremlin may be looking to introduce a little plausible deniability into the scale of its support for Assad, mercenaries may prove an increasingly appealing alternative.

St Petersburg newspaper Fontanka interviewed some mercenaries who said that they were lured by a promise to get $4,000 per month and a solemn oath that the first salary would be transferred within days.

What happened next? Fontanka quotes one of those mercenaries as saying:

The large field between Latakia and Tartous was surrounded by barbed wire. There were Syrian reservists and our battalion. Previously, it was a race track. We were housed in the former stables. By October, there were 267 people from Slavic Corps, split into two companies. One company was staffed by Cossacks and the other by people from all over Russia, there were about 10-12 guys from St. Petersburg. As the commanders said, the the Syrian corps was expected to reach about 2,000 people.

Photo: Militants from the “Slavic Corps”, who are fighting in Syria on the side of the Assad regime