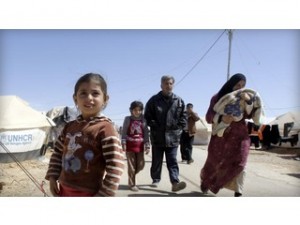 The World Bank estimates that Lebanon has lost some $7 billion from the flow of Syrian refugees into the country, according to a report by An Nahar .

The report also revealed that President Michel Suleiman and caretaker Prime Minister Najib Miqati held a meeting on Friday to discuss the ongoing efforts to support Lebanon on the economic and security levels and in harboring Syrian refugees.

An Nahar also reported that Suleiman is scheduled to travel to Kuwait at the beginning of next week to attend the Arab-African Summit.

Kuwait is also expected to host in January 2014 a donor conference on Syrian refugees, which will help Lebanon follow up on September’s New York meeting that focused on supporting the country in hosting the refugees.

The World Bank will set up a trust fund to raise hundreds of millions of dollars to help Lebanon bear the cost of hosting a human wave of refugees from Syria, the bank’s regional director said on Friday.

The trust fund will seek to attract $300 million to $400 million in donations for the most urgent priorities, including education and poverty reduction, World Bank Middle East director Ferid Belhaj said.

“The trust fund is now being put together as we speak and should be up and running within four to six weeks,” he told Reuters in his office in central Beirut.

Lebanon, the smallest of Syria’s neighbors with a population of just over 4 million, has the largest Syrian refugee population – the United Nations puts the figure at 814,000 but the World Bank says it is over 1.5 million, and growing.