Hezbollah chief vows to stay in Syria as long as needed 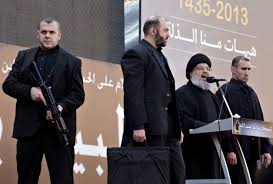 Hezbollah has helped turn the tide in Assad’s favor this year, leading the recapture of the town of Qusair and fighting alongside his forces south of Damascus and in the northern city of Aleppo.

“As long as the reasons (to fight in Syria) remain, our presence there will remain,” Nasrallah said in a speech in front of tens of thousands of Lebanese Shi’ites marking the religious ceremony of Ashoura in southern Beirut.

“Our fighters are present on Syrian soil…to confront all the dangers it faces from the international, regional and takfiri attack on this country and region,” Nasrallah said, referring to the foreign Islamist rebels fighting in Syria.

Takfiri is a term for a hardline Sunni Muslim who sees other Muslims as infidels, often as a justification for fighting or killing them.

The 2-1/2 year-old civil war has polarized the Middle East between Sunni Muslim powers such as Turkey and the Gulf Arab states, who support the Sunni rebels, and Shi’i’te Iranand its Lebanese ally Hezbollah, who back Assad. The president belongs to the Alawite faith, an offshoot of Shi’ite Islam.

As well as drawing Shi’ite and Sunni fighters into Syria from Lebanon, the conflict has raised sectarian tensions within the small Mediterranean state, as violence has spilled over the border and brought the country to political deadlock.

Prime Minister Najib Mikati resigned in March but his designated successor has failed to reach consensus on forming a new government.

Nasrallah said any attempt by Hezbollah’s Sunni-led political opponents to link a deal for a new cabinet with demands for its withdrawal from Syria would be futile. Hezbollah, a political movement as well as a militant group, had two ministers in Mikati’s government.

“Anyone who speaks of Hezbollah’s withdrawal from Syria as a condition to form a new government…is imposing a crippling condition,” he said, and the organization would not bargain the region’s future “for a few useless cabinet portfolios”.

Nasrallah, whose fighters battled Israel during a 34-day war in 2006 and whose predecessor and top security official were both assassinated, has often delivered speeches via video link from secure and undisclosed locations.

But his comments on Thursday marked his second public appearance in 24 hours, after a speech on Wednesday evening when he accused some Arab countries of standing alongside Israel in opposing attempts to reach an international agreement with Iran over its nuclear program.

“What is the alternative to an understanding between Iran and the countries of the world? The alternative is war in the region,” Nasrallah said on Wednesday night.

On Thursday he spoke in the same south Beirut neighborhood where a car bomb killed at least 24 people in mid-August.

Thursday’s Ashoura procession in Beirut, when Shi’ites mark the death in battle more than 1,300 years ago of the Prophet Mohammad’s grandson Imam Hussein, passed off peacefully despite security fears after recent car bombings in Lebanon.

Shi’ite marchers in Beirut said they would not be put off by the recent violence.

“We are coming out to the streets because no explosion, no rocket, no suicide bomber will stop us from commemorating our holy day,” said Khudr Saleh, a 41-year-old grocer.