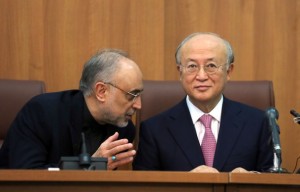 Iran agreed Monday to give U.N. officials greater access to some of its nuclear facilities, displaying a new openness with international inspectors at a time when its diplomats are seeking to win relief from crippling economic sanctions.

The pact signed in Tehran was described by Iranian officials as a “road map” for resolving long-standing disputes with the International Atomic Energy Agency, the U.N. watchdog that monitors Iran’s nuclear facilities. Western governments have been pressing Tehran for greater transparency as one of the conditions for a broader diplomatic settlement of the nuclear crisis.

The accord does not, however, explicitly grant U.N. inspectors access to Iran’s most sensitive sites, including military facilities where Iranian scientists are alleged to have carried out nuclear-weapons-related research a decade ago. IAEA chief Yukiya Amano, who traveled to Tehran for the signing, acknowledged that key issues are unresolved.

“This is an important step forward to start with, but much more needs to be done,” Amano told reporters at a joint news conference with Iran’s nuclear agency chief, Ali Akbar Salehi. “The IAEA is firmly committed to resolving all outstanding issues through dialogue and cooperation.”

Shortly after the signing, Iranian news outlets announced that formal permits had been issued allowing IAEA inspectors to visit two disputed nuclear sites. It was unclear when the inspection would occur.

The IAEA negotiations are proceeding on a separate track from the high-level talks among Iran, the United States and five other world powers on proposed limits to Iran’s nuclear capabilities. Those talks hit a snag over the weekend as diplomats failed to agree on an interim deal that would freeze key parts of Iran’s nuclear program in exchange for modest relief from economic sanctions. The talks will reconvene Nov. 20.

Under the accord signed with the IAEA on Monday, Iran agreed to give inspectors “managed access” within the next three months to two key nuclear sites: the country’s main uranium mine at Gchine, near Bandar Abbas, and a plant that produces heavy water, a coolant to be used in Iran’s Arak nuclear reactor. Western officials say the Arak facility, if completed, would provide a first step toward the production of plutonium, which can be used in nuclear weapons.

Iran also agreed to provide information about nuclear facilities that the government has said it plans to build. Iranian officials have said that as many as 16 sites have been picked for additional nuclear reactors or uranium-enrichment plants, but it has not supplied U.N. officials with blueprints or other documents.

There was no mention in the agreement of a long-standing request by the IAEA to inspect Iran’s Parchin military complex, where U.S. officials think Iranian scientists carried out secret research on nuclear weapons components in the past decade.

Western intelligence agencies believe that Iran tested detonation systems for a nuclear bomb at Parchin as recently as 2003. Under mounting international pressure, government officials ordered a halt in weapons- related research late that year, U.S. intelligence officials say. U.N. officials have said they hope to eventually gain access to Parchin and other alleged research sites, as well as to the scientists who carried out the experiments.

Salehi, the Iranian nuclear official, said the IAEA agreement will lead to greater overall co­operation with the U.N. watchdog agency, including on what he called the “fabricated nuclear case,” a reference to the allegations of nuclear weapons work. Iran maintains that it is uninterested in nuclear weapons and that its programs are all directed toward energy production and medical research.