Laborers opt to go home after clashes with Saudis 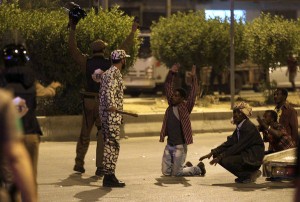 BEIRUT, Lebanon — Thousands of foreign laborers turned themselves over to the authorities in Saudi Arabia on Sunday to be sent to their home countries after a night of protests and clashes in which one foreigner and one Saudi were killed.

The protests were directed against a Saudi campaign to arrest and deport illegal immigrants who were given until last week to get valid work permits or leave the country. In recent days, the security forces have raided the work sites of large employers of foreign laborers and the neighborhoods where they live to round up violators.

Saudi Arabia and other oil-rich Persian Gulf nations have long relied on large numbers of foreign laborers from Africa, Asia and elsewhere to keep their economies running by doing jobs like driving taxis and building skyscrapers as well as staffing hospitals, schools and universities.

Human rights organizations have accused the gulf countries of failing to protect the rights of foreigner laborers, many of whom pay large placement fees to get jobs and surrender their passports to those sponsoring them once they arrive.

On Sunday, François Crépeau, the United Nations special rapporteur on the human rights of migrants, called on Qatar to abolish the sponsorship system for migrant laborers, saying it often leads to abuses.

Qatar, which is scheduled to host the 2022 World Cup, has increased its reliance on foreign workers to prepare for the event.

Mr. Crépeau told reporters in Qatar’s capital, Doha, that many foreign workers lived in subpar conditions, and he described one worker residence he had visited as a “slum,” Reuters reported.

Officials in gulf countries contend that no workers are forced to move to the region for jobs but that those who do can earn much more than they can at home.

The tensions in Saudi Arabia come amid a push to increase the percentage of Saudis in the country’s work force while reducing the number of foreigners.

The Saudi government announced an amnesty for foreign workers without proper work permits that ended on Nov. 4. On Saturday, clashes broke out between workers and police officers in a poor neighborhood in Riyadh, the capital, where many migrants live.

Saudi authorities said that scores of people were injured and that hundreds were detained; more than 100 cars were damaged. One Saudi and one unidentified person were killed, they said.

On Sunday, thousands of laborers, most of them from countries in East Africa, turned themselves over to the authorities. Some had paid smugglers to get them into the kingdom, while others had arrived legally but had changed jobs or not kept their employment documents up to date.

More than five million of Saudi Arabia’s 27 million inhabitants are foreigners, most of them low-paid laborers.
NY Times