A christian will be deputy leader of Syria’s MB party 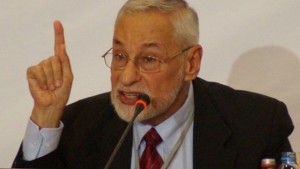 The Syrian branch of the Muslim Brotherhood will announce the formation of a political party on Nov. 12 with the party’s deputy leader set to be a Christian, the London-based Asharq al-Awsat newspaper reported on Friday.

The new party will be named the National Constitution and Freedom Party and will be known by the Arabic name Waad (the Promise), Syrian Muslim Brotherhood General Guide Ali Sadreddine Bayanouni told Asharq al-Awsat.

Bayanouni said the party will be led by UK graduate Mohammad Walid and his deputy will be a Christian priest.

Despite that it is a Muslim Brotherhood party, Waad will have members from various political and nationalist backgrounds.

Bayanouni said a third of the membership will go for Muslim Brothers, a third for other Islamists, and the final third for liberal and nationalist figures.

The party will seek to achieve “equality, justice, dignity and freedom” for the Syrian people and strive to establish democratic mechanisms and promote Islamic scholarship.

“The party leaders have agreed to adhere to the principles of democracy and freedom for our people and not to exclude anyone,” Bayanouni was quoted by Asharq al-Awsat as saying.

Waad will “support the oppressed and realize righteousness, stand by the weak, [and] return all rights to all Syrian people, regardless of their background or ethnicity and without discrimination,” he added.