US donates a Cessna plane to Lebanon 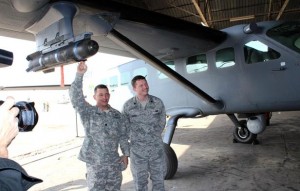 The Lebanese Air Force on Wednesday   received  the delivery of a Cessna 208B  plane donated by the United States to Lebanon.

US Ambassador to Lebanon David Hale said in a speech delivered at a ceremony marking the occasion that the single turboprop aircraft would help the Lebanese Armed Forces conduct effective border security patros and combat the risks of extremist groups.

Hale also voiced Washington’s support for the LAF and praised the institution as Lebanon’s only legitimate defensive force.

Meanwhile, a Lebanese Air Force spokesperson explained that his country uses the planes for aerial surveillance, training missions as well as VIP flights.

US Air Force personnel landed at the Lebanese Air Force’s Beirut Airbase to join the ceremony, which was attended by top LAF security officials.

The US donated a Cessna aircraft to Lebanon in 2009 as well as six Huey II military helicopters in 2012.