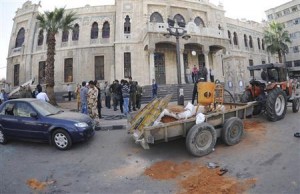 A bomb exploded in a central square of Damascus on Wednesday, killing eight people and wounding several others, Syria’s state news agency said.

The SANA report said the blast hit Hejaz square, in the heart of the capital, but offered no further details as to who was behind the attack.

Photo: People gather around the scene of a bomb explosion in front of of al-Hijaz train station in central Damascus November 6, 2013, in this handout picture released by Syria’s national news agency SANA. The bomb killed eight people and wounded others, state media said. REUTERS/SANA/Handout via Reuters